Newly elected lawmaker Sixtus "Baggio" Leung, center, is restrained by security after attempting to read out his oath of office at the Legislative Council in Hong Kong on Nov. 2, 2016
Anthony Wallace—AFP/Getty Images
By Kevin Lui / Hong Kong

Following an unprecedented move by Beijing to effectively bar two newly elected, pro-independence Hong Kong lawmakers from taking their seats, there are now worrying signs that more than a dozen of their more moderate colleagues could be in the central government’s crosshairs.

Speaking at a seminar Wednesday in the southern Chinese city of Shenzhen, part of the sprawling conurbation that borders Hong Kong, mainland legal official Wang Zhenmin claimed that up to 15 currently serving legislators who favor greater political freedoms for the semiautonomous territory had “brought shame on people across China” by turning their October inaugurations into acts of protest — or, as he put it, “making a show at a solemn oath-taking ceremony” and “turning oath-taking into a joke.”

His remarks came two days after the Standing Committee of the National People’s Congress (NPCSC), China’s largely ceremonial legislature, decided that pro-independence lawmakers Yau Wai-ching, 25, and Sixtus “Baggio” Leung, 30, should be barred from the legislature because, during their swearing-in ceremonies, they pledged allegiance to the “Hong Kong Nation” instead of Hong Kong as a Special Administrative Region of China, and also referred to China in a manner considered derogatory.

Barring the additional 15 lawmakers would amount to a major purge of liberal voices in the chamber and leave the legislature in complete control of the government and pro-Beijing politicians.

Nathan Law, a student leader who emerged from the Umbrella Revolution protests of 2014 to become, at 23, Hong Kong’s youngest ever legislator, is one of the lawmakers in Beijing’s sights. During his swearing-in, he stuck to the script of the oath, but raised his intonation at the end of “The People’s Republic of China” whenever it was mentioned in the script, as though asking a question. He had also quoted Indian independence icon Mohandas Gandhi before he took the oath.

Law insists that he has taken his oath lawfully. “They are trying to launch an all-in war against all the democrats,” he tells TIME. “That is political oppression from the Beijing government.”

Also on Wednesday, Ted Hui, a legislator from the Democratic Party, was ejected from the chamber when he questioned the president’s decision not to allow an adjournment debate on the NPCSC’s intervention. Efforts by fellow legislators to stop Hui’s eviction led to scuffles, reports Radio Television Hong Kong, causing the meeting to be suspended and relocated.

The NPCSC’s ruling on Yau and Leung followed an appeal to it by the city’s deeply unpopular, pro-Beijing administration. The two rebel lawmakers were elected on a wave of popular sentiment that has seen many in Hong Kong consider, for the first time, far greater autonomy for the territory if not self-determination or outright independence.

The committee’s decision comes as the culmination of a weeks-long firestorm and political crisis, which could well become a constitutional one, in a city that has constantly chafed under Beijing’s sovereignty since it was returned to China by former colonial power Britain in 1997. Many are furious that the local government invited mainland authorities to rule on a matter that the Hong Kong legislature should have been allowed to independently resolve.

Anger and trepidation over the interference drove thousands onto the territory’s streets Sunday afternoon. Skirmishes broke out later that evening, when protesters attempted to approach the gates of the Liaison Office building, forcing the police to disperse the crowd with batons and pepper spray.

Inviting China to rule on the status of Hong Kong legislators “amounts to China directly handpicking legislative candidates,” veteran labor organizer and former pro-democracy lawmaker Lee Cheuk-yan tells TIME. “It might be that, even the act of merely calling for ending one-party rule in China or opposing the Chinese Communist Party could well be found as out of line.”

David Zweig, a China observer at the Hong Kong University of Science and Technology, tells TIME that while Yau and Leung “brought the wrath of China down on themselves,” pushback from Hong Kong people will only increase if Beijing starts clamping down on other lawmakers.

“It’s going to become a huge crisis” if Beijing does further interfere, he says. “At this point it’s just still small-scale protest. But if they use this excuse to cull the Legislative Council of people who they don’t like, that’s a whole different ballgame.”

By Thursday morning local time, local media outlets were reporting that the former head of the politically conservative Taxi Drivers and Operators Association had entered an application at Hong Kong’s High Court for a judicial review, seeking to challenge the validity of the oaths taken by eight pro-democracy lawmakers. 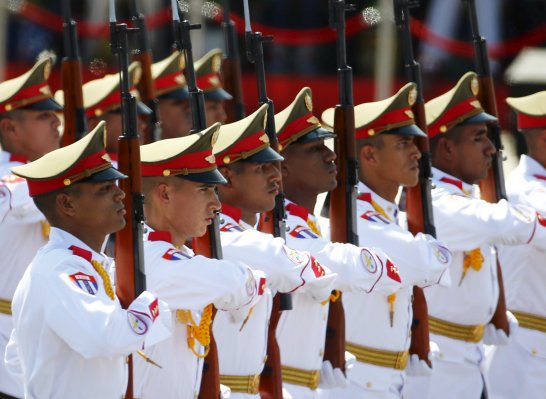 Cuba to Hold Military Drills After Trump Victory
Next Up: Editor's Pick