Donald Trump and the Abyss of the Value Gap

As I walked out of my hotel early this morning, the same hotel where Donald Trump and his supporters reveled in their surprise victory, I stumbled a bit. Slight vertigo had set in. Trump had pulled off a historic victory, and even though I wasn’t a Clinton supporter, the result threw me off. It happened. White America (and a smattering of people of color) elected an ill-informed racist who, by any standard, is morally and ethically bankrupt.

Over the next few months, pundits and scholars will dissect this election. Many will find fault with Hillary Clinton and her campaign. Some will blame James Comey and the FBI. Others will hold the third-party candidacies of Jill Stein and Gary Johnson responsible for her defeat. But most will talk about the discontent of working-class white Americans, how elites dismissed them with scorn and treated them with condescension, and how they, in the end, rejected the status quo and the economic philosophy that has left them behind. These are the folks Donald Trump called “the forgotten men and women of our country,” and this election will be read as their revenge.

But that is a lie. To be sure, non-college-educated, working-class white men overwhelmingly voted for Trump. But what the early exit-poll data, with all of its flaws, reveal is a much more complicated picture. The fact, and it is one this country must confront, is that the majority of White America voted for Trump to be the 45th President of the United States. According to the results of the Edison Research’s national election poll, 53% of white women voted for him and 48% of young white people supported him. Large numbers of college-educated white women (45%) and men (54%) voted for him. What is becoming increasingly clear is that White America, writ large, supported the candidate who wants to ban Muslims, build a wall on our southern border and deport undocumented workers; who calls himself the candidate of law and order; and who degrades and demeans women. This isn’t the revenge of working-class white men alone. White America—and I mean those who see themselves as white people, not as those who happen to be white—has struck back.

I have written of the value gap: that what fundamentally organizes this country is the belief that white people matter more than others. This belief saturates our social, economic and political lives. It is baked in to who we take ourselves to be as Americans.

With each moment of substantive progress, with each moment of hard-fought gains to advance democracy, people reassert the value gap to arrest change and to maintain the belief that white people matter more. (It certainly has felt that way since President Obama was elected in 2008). But the value gap isn’t the possession of high-school-educated white folks. The ugliness of so many white elites can’t be hidden behind the veil of so-called white working-class resentment. Black people know that business owners and politicians—upstanding citizens in the community—donned white sheets and sat on White Citizens’ Councils. The election of Donald Trump is just the latest instance of this collective sickness. White America still wants to matter more.

But the writing is on the wall, and all the racial anguish expressed this election cycle reflects this fact: that we are, even with the election of Donald Trump, in the death throes of the idea of White America. We will have to prepare ourselves for, at least, the next four years. Organize. Fight. And ensure that our children are safe. I am not even sure how long the weeping and gnashing of teeth will last. Hell, James Baldwin wrote in Harper’s Magazine in 1961 that the questions that America faced about the death of segregation—a symbol of White America’s stranglehold—were “how long, how violent and how expensive the funeral is going to be.”

And here we are in 2016 still trying to put it all in the ground.

So as we do the postmortem of the election, as we examine how Donald Trump laid waste to the Establishments of the Republican and Democratic parties, as we announce the bankruptcy of an economic philosophy that has decimated workers, no matter the color of their skin, and as we reflect on what this all means for the country’s standing in the world, let’s not lose sight of what happened on Nov. 8. White America made its last stand, and it’s not going to be an easy death.

As I left the hotel, a homeless black man paced back and forth on Sixth Avenue. He caught my attention. Not because he asked for money. He didn’t. Instead, he was engaged in a passionate argument with no one in particular in a language only he understood. He waved his hands, almost pleading for answers. His madness seemed eerily representative. 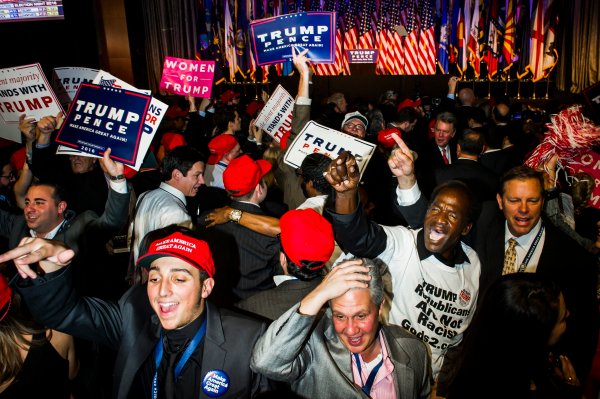 Let Donald Trump Supporters Have What They Voted For
Next Up: Editor's Pick