Calls to Crisis Support Lines Up After Donald Trump's Victory

Calls to crisis support lines have gone up significantly from the LGBTQ community following the election of Donald Trump, as people express fear and concern that strides made in equality will recede.

“We have made so much progress over the past few years, and there’s a fear that we’re going to backwards and LGBTQ people are going to lose their rights,” Steve Mendelsohn, spokesperson for the The Trevor Project, a suicide prevention hotline for LGBTQ youth, said. “Young people are worried about their futures.”

Mendelsohn said the call volume to the suicide prevention hotline was “more than double” than what the organization expects on a typical Tuesday or Wednesday. He was unable to provide specific numbers of callers at the time.

“Callers are expressing a lot of fear and anxiety around the election results,” he said. “We’re seeing a direct impact.”

At Crisis Text Line, the volume for people reaching out to the text hotline doubled to over 2,000 people in the last 24 hours, chief data scientist Bob Filbin said. The majority of the texts came from LGBTQ teens or friends of those who identify as LGBTQ.

“They were scared about the results of the election and how that might impact them or their friends,” Filbin said. “A lot of the concerns were around policy and how policy might change at the state or federal level.”

The hotline generally receives texts from a disproportionate number of youths who identify as LGBTQ but who usually do not reach out over concerns about their sexuality or gender. That changed on election night.

“Last night, it was specifically about being LGBTQ,” Filbin said, noting that the most used words in the texts were “scared” in the context of being LGBTQ.

Greta Martela, co-founder and executive director of Trans Lifeline, a hotline for transgender people, said the line received 426 callers on election night, the most it has ever gotten. The previous record was 250 callers, Martela said.

Chief concerns among callers were worries about being put in camps, access to healthcare and the possibility of losing the right to change identity documents.

“We were hoping that we would have an election and things would get better,” Martela said. “This is at a time when the Obama administration has been doing wonderful things for trans people and it’s probably all doing to be undone. We’re looking at four pretty bleak years. 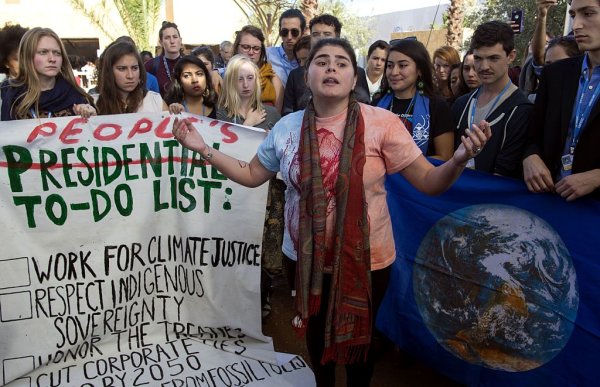 Donald Trump's Election Victory Sparks Protests Across the World
Next Up: Editor's Pick