In the early hours of Wednesday morning, Donald Trump was elected to be the 45th President of the United States, a prediction-defying result and one of the most extraordinary developments in recent American memory.

LightBox asked 24 members of the prestigious Magnum Photos agency to take one photograph on Election Day that would define how they saw this election. Here are their photos—and their reasons.

Tina's thoughts on election day: "I'm Tina. I'm 35 years old and I have my daughter Trinity who’s 11. As much as I see it to be a hard time in my life right now I see it as almost the best time. I get to show Trinity how to be strong through those times so she doesn’t waver or give up on herself." Vallejo, Calif. Nov. 8, 2016.
Carolyn Drake—Magnum Photos

“As a woman I find the results of the election extremely difficult to stomach. I had grown to admire the strength and intelligence of Hillary Clinton, a stark contrast to the unabashedly sexist man our country elected.”

“I have covered democratic elections, encouraged or even imposed by the US, that have brought to power populist, corrupt and illiberal leaders in many countries. Perhaps, then, I should not be so stunned that Donald Trump is the President that America wants.”

“It is difficult not to feel absolutely lost and disconnected in Europe this morning. From this distance, it is totally confusing. I made pancakes for my kids and then tried to explain why the ‘man who says those awful things’ is now president of the United States.”

“We Canadians like living in the bush, so since this spring, I’ve been building a cabin out of salvaged materials at the back of my farm to get away from the invasiveness of the internet, the madness of this particular election campaign, and to maintain some kind of contact with myself and with nature. I just finished paneling the walls with scrap, walnut, oak, cherry, pine, and cottonwood boards sawn in my local mill from trees I cut off the farm.

I went back yesterday, as the election results began to roll in, to take this picture. I realized that I’m going to need a table, a chair, and a bed soon, because it’s going to be a long four years. It is now Wednesday afternoon and the results of last night are known. Like most Canadians, I’m in a state of shock. I’m at the Toronto Airport and in a few hours I’ll be at the Standing Rock protest camp in North Dakota against the Dakota Access Pipeline. Trump believes climate change is just a Chinese conspiracy theory to bring the US economy to its knees, and he promises to re-open development of the Keystone XL Pipeline. As Canadian Bruce Cockburn once sang: ‘Will there ever be an end to the Indian wars?’ No wonder the original Americans don’t bother to vote.

As for me, I owe my career as a Canadian, to all the presidents of the United States since Ronald Reagan, who have continued to create turmoil, havoc, wars, and hatred around the globe. Tonight therefore, is a good occasion to get out my bed roll and christen the cabin in order to listen to mother nature – or what’s left of it.”

Following the American elections at the Carré du Temple in Paris. Posing for a selfie with Trump. 2016
Richard Kalvar—Magnum Photos

“The election of Donald Trump is the biggest catastrophe to befall the United States since the Civil War. It will undermine our democracy, our economy and our standing in the world.”

“I woke up in the middle of the night to discover this headline on my computer. I thought I was still dreaming, a bad dream, and went back to bed. I got up this morning with a heavy hangover. I always thought that if ever the extreme right came to power in France, I could ask for political asylum in the USA. I can’t do that any more.”

“Brexit in Britain, Trump in the USA — what hope for Germany and France?”

Donald Trump during his speech after being elected as the 45th U.S. president. Brussels, Nov. 9, 2016.
John Vink—Magnum Photos

“I was refused access to the Marriott in Brussels for Election Night because of overcrowding. So I watched Mr. Trumps’ hands on TV during his speech after being elected President of the USA.”

“A long night in London with the Democrats Abroad began in a spirit of glitter and hope. It ended at around 4:00 a.m. when Florida went to Trump. Stick-on stars started to peel from faces around the bar. Fancy dresses suddenly looked as odd as they would at a funeral. The lady with the Mexican hat and ‘Trump Adios’ placard left. I drove home through the London rain saddened and stunned.”

“My feelings are one of shock, but it is the second time I have felt this emptiness in a year. In four years, Trump will be gone, but we (the British) will always be out of Europe… Imagine Trump forever? That’s how I feel.”

“Waking up in Erbil, Iraq, to a changed world landscape.”

“In Erbil, Iraq, I was having my breakfast when I saw on a Kurdish news channel that Donald Trump was winning the American presidential election. The waitress, a young Ukrainian arrived a month ago in Kurdistan for work, was watching the news and wiping glasses at the same time, she told me: ‘They are all the same, Clinton or Trump, it doesn’t make any difference for us, they are all corrupt, like in my country in Ukraine.'”

“Catalina watching the results start coming in last night. This morning she woke up crying, scared, and asking why. Jim and I are struggling to give her answers, and not to show how frightened we are as well.”

“Today I arrived in Baghdad. I would say that the weight of American foreign policy still lingers on here, evident not least from the large number of American military personal I saw at the airport. Regarding Trump’s victory, the first Iraqi journalist I met told me he was shocked but that it was irrelevant anyway because U.S. presidents as individuals were powerless to affect change. From my perspective, the biggest surprise of these elections has been to see how disconnected most media outlets are with the people. It is yet another example of a shift in 21st century journalism where mainstream news networks increasingly prioritize social media over collecting and reporting stories from the ground.”

“Last night I watched the dream of a woman president vanish. This morning the subway was somber with the news of total control of our nation and no light on the horizon.”

“I took this picture when it was clear the momentum was with Trump. Times Square was packed, and almost completely silent.”

“Nothing I could meaningfully photograph here in London so I went to my drawing class. I am pretty bad as you can see. I live with the hope of getting better. Went to bed expecting to feel slightly nauseous to find Hillary had won, instead of more nauseous that Donald had. What a choice! There is not much I can do about it. Shit happens, it’s not the end of the world.”

“Here in Graz in central Europe, residents wake up to the shockwave of Trump as the new U.S. President. How will this election impact the upcoming Austrian presidential election next month? There is no telling, isn’t it? In Graz, it is not uncommon to come across some vandalized campaign posters of Nobert Hofer, the presidential candidate of the populist right-wing Freedom Party of Austria. Mr. Hofer and Mr. Van der Bellen of The Greens are running a neck-and-neck race. But with the growing number of nationalist anti-immigration political parties in Europe and the recent Brexit and now Trump as the new U. S. President, the New World Order now is full of fears and uncertainties. The question is how far the U.S. and Europe are swinging to the right.”

“Mexico, a war to come: in the time of agony, serpents warn the invisible community that the menace will come and they will have to face with courage the white men from the north with great weapons that will spit fire: By all ye cry or whisper, By all ye leave or do, The silent, sullen peoples Shall weigh your gods and you.”

“Definitively the end of our cushy nice bubble.”

“A disorienting blend of entertainment, simulation, fact, fiction and drama conformed to and derived by televised spectacles.”

“Let it not be supposed that I am detailing any mystery, on penning any romance” – Edgar Allan Poe

“Trump’s election reminds us of several American realities, including that there are many who feel disenfranchised by the system. I understand the mentality, some are in my family and in the community in which I grew up. These folks are not evil, they are good people. Now is not the time to walk away from them but to work together and figure this out.” 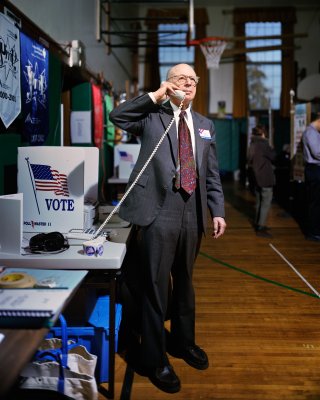 Photographing the Places Where We Vote
Next Up: Editor's Pick