30 Years of Beastie Boys: A Photographer Recalls the Early Days

Ricky Powell is known for his candid street photography, capturing moments during hip-hop’s “Golden Age” and the 1980s downtown art scene in New York City, with his subjects ranging from the Beastie Boys and Run-DMC to Andy Warhol and Jean-Michel Basquiat. “Graffiti writers were like outlaw celebrities,” says Powell, “I was born at the right time.”

Identifying as an “individualist” rather than a photographer, Powell’s relationship with the Beastie Boys first started when he and Adam Horovitz, later known as Ad-Rock, grew up together, hanging out in a schoolyard in Greenwich Village in the 1970s.

Fast-forward to Sept. 1985, Powell began an unexpected career path as a photographer, when he obtained an ex-girlfriend’s Minolta 35mm camera, “I never thought I’d be taking pictures or would be a photographer, because I went to Hunter college to be a gym teacher,” says Powell. He saw the Beastie Boys for the first time that month at the Cat Club in New York City following their opening gig on Madonna’s successful The Virgin Tour. “I said, let me go check these kids,” says Powell, knowing Horovitz was in the group. “I’ll never forget this, the lights went black and then the crowd went ‘woo’ and then the signature Def Jam 808 bass drum sound dropped and the crowd went nuts.” Attendees that night included budding rapper LL Cool J and Def Jam co-founder Russell Simmons. After the show, Powell went backstage and Horovitz introduced him to bandmates Adam “MCA” Yauch and Mike “Mike D” Diamond and one thing led to another.

From left: Ad-Rock, Mike D and MCA in an image known as the "Charles Street Shuffle," during Powell's first official shoot with the Beastie Boys for the East Village Eye in 1986.
Ricky Powell

During the spring of 1986, Powell was asked by hip downtown magazine the East Village Eye to shoot the Beastie Boys for his first cover shoot. Powell chose the familiar location of Greenwich Village by the P.S. 41 schoolyard as a setting, with Def Jam co-founder and producer Rick Rubin overseeing the photo shoot, which only lasted 30 minutes. “If I don’t get the shot in two snaps, I’m in the wrong business,” says Powell. One image from this shoot, a homage to the Beatles’ Abbey Road cover known as the “Charles Street Shuffle,” became one of the Beastie Boys’ most iconic images.

“You could say I’m taking the photo of the subject, but I like to say to the subject, person or people, look we’re creating this image together, you be you,” says Powell.

From left: Mike D, MCA and Ad-Rock on the first stop of their Licensed to Ill tour in Missoula, Mont., Jan. 1987.
Ricky Powell

On Nov. 15, 1986, the Beastie Boys’ debut album, Licensed to Ill dropped. It became the first rap album to top the Billboard album chart and eventually sold over 10m copies in the United States alone. “Listen, I ain’t no art expert or music expert, but to me they kind of had a sound that wasn’t mainstream,” says Powell, “It was kind of underground and made them so cool that the music industry had to bring that to the surface.”

Working as a messenger in the Def Jam office, Powell was suddenly brought along to document the Beastie Boys’ Licensed to Ill Tour. “They never expected it to become what it had become, so I think a lot of the bookings were just little venues and whatnot and then it turned into arenas, which is kind of the beauty of it,” says Powell.

The Licensed to Ill tour eventually turned into the Together Forever Tour with Run-DMC, with Powell joining both groups in Europe in May 1987. Powell’s images hanging out with both bands would go onto reflect two rap groups on the rise during early hip-hop’s position and acceptance as a global phenomenon.

“Natural chemistry is possibly a pre-requisite. Every situation is unique and I think you have to have some kind of feeling. If you want to have a good symbiotic relationship with a subject that you’re feeling, you have to ‘be like water,’ to quote Bruce Lee.” 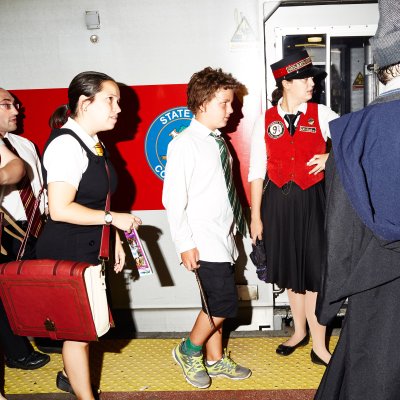 Inside the Largest Harry Potter Meet-Up in the World
Next Up: Editor's Pick