Donald Trump’s foreign policy? Still up in the air at this point. With Hillary Clinton, we would have known exactly what we were getting. That was her biggest selling point—and a big part of the problem. But Trump is the ultimate black box. Much of this was by design—making America great again was always about America itself, allies and enemies be damned. That makes for an effective political pitch, but it’s a wholly unrealistic governing philosophy for a person whose main responsibility is to navigate the country through choppy geopolitical waters.

And these days, the waters are heaving. The foreign policy challenges Trump will face on Jan. 20 are much more complex than those that Obama inherited from George W. Bush. Technological change, particularly in communications and in the workplace, creates risks and problems that are entirely new. Russia is looking to undermine U.S. power and influence whenever and wherever possible, and a Trump presidency could well embolden Vladimir Putin. Trump becomes the face of Western capitalism at a moment China is offering the world an alternative economic model. For fans of globalization as it has progressed for the past few decades, that’s cause for concern.

Let the questions begin. How best to respond to Russian aggression in cyberspace while minimizing the risk of a dangerous escalation? How best to balance all-important relations with China? How long before North Korea demands an urgent and forceful U.S. response? How best to repair damaged relations with Britain, European allies, Japan, Israel, and Saudi Arabia after a period of tension in which each of them has hedged bets on American staying power? There are no easy answers. There weren’t going to be any for a former secretary of state, and there certainly won’t be any for Donald Trump.

We do know that the “pivot” to Asia is dead, as is the Trans-Pacific Partnership (TPP) trade deal that went along with it. Asian allies had signed on to TPP to balance against China’s growing geostrategic weight. Overnight, China now looks much more stable and sane to its Asian neighbors than the U.S. does. America’s special relationship with Europe was already under strain; there’s no reason to think that will change with President Trump sitting in the Oval Office. Fires in the Middle East will continue to rage like they always have, and while American forays in the region have yielded few tangible results over the last decade-plus, they at least added some semblance of predictability to the proceedings. No longer.

But let’s be clear: “America First” is not an isolationist policy but a unilateral one. It does not have America retreat from the world, but impose its will firmly upon it. Trump views foreign policy as a businessman would—as purely transactional. That makes it incredibly difficult for the U.S. to continue in its capacity as the policeman of global security, the architect of global trade and the cheerleader of global values. That appeals to plenty of people in America who feel they’ve been left behind.

Read More: See How Markets Around the World Reacted to a Trump Victory

Donald Trump has helped to reveal just how many Americans care more about nation-building at home than in far-flung battle zones. It’s clear that millions of Americans want a more robust economic recovery, a surge in job creation, investment in infrastructure and a budget surplus—quite a combination. Americans are divided on how to improve healthcare, immigration and tax policies, and those divisions are reflected in a polarized Congress. But they’re not nearly so divided on the need to invest in the future of America’s economy rather than Iraq’s or Syria’s. They aren’t nearly as interested in U.S. foreign policy. That’s good news for Trump, who will have to figure it out as he goes along. That’s bad news for the rest of the world. 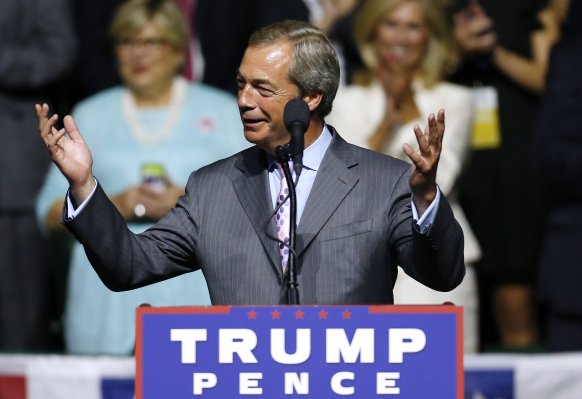