Hillary Clinton Concedes to Donald Trump: 'We Owe Him An Open Mind'

“Donald Trump is going to be our president. We owe him an open mind and a chance to lead,” Clinton said, speaking in New York City nine hours after the results were called by the Associated Press. “Our constitution enshrines the peaceful transfer of power. And we don’t just respect that, we cherish it.” It was perhaps a dig at the controversy surrounding her opponent’s claims that he might not have accepted the legitimacy results had he lost.

Clinton admitted the emotional toll the surprising results of the election had taken on her.

“I know how disappointed you feel because I feel it too,” she said. “And so do tens of millions of Americans who invested their hopes and dreams in this effort. This is painful and it will be for a long time.”

But the former Secretary of State kept the tone of the speech she never expected to give optimistic, rallying her supporters to keep working towards reforms they believe in. “Our constitutional democracy demands our participation, not just every four years but all the time,” she said. “So let’s do all we can to keep advancing the causes and values we all hold dear.”

Towards the end of her speech, Clinton acknowledged that she would not become the nation’s first woman president. “I know that we haven’t shattered that highest and hardest glass ceiling, but someday someone will,” she said. “And to all the little girls who are watching this, never doubt that you are valuable and powerful and deserving of every opportunity in the world to pursue and achieve your own dreams.” 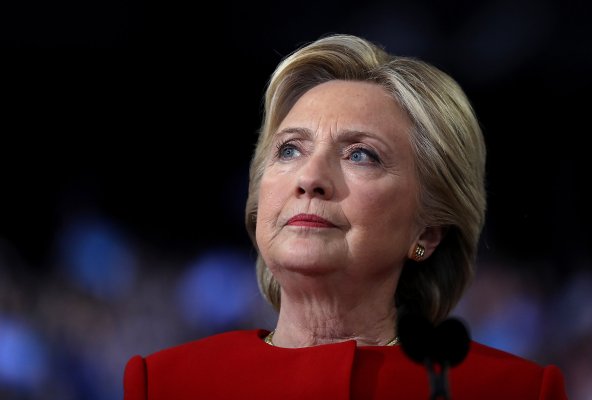 Even an Electoral College Tie Would Have Spelled Defeat for Hillary Clinton
Next Up: Editor's Pick