Donald Trump, the Markets and Economic Growth—What to Expect

As they say in the markets, past performance is no guarantee of future returns. Donald Trump’s surprise presidential victory has turned the markets, which have run at record highs for the last few years, upside down, with precipitous drops in the Dow, global stocks, bonds, and a flight to safety assets like gold. That’s actually not surprising. Not only have investors long feared the economic implications of a Trump presidency, but markets never like the uncertainty of a new president (the U.S. stock market fell 5% when Obama was elected in 2008, for example). A few days after an election, they usually rebound (indeed, just a few hours after the Trump victor, markets are already gaining back a bit of what they’ve lost). Longer term, they tend to respond more to fundamental economic factors rather than politics (btw, to the extent that politics matter, Democrats tend to be better for markets historically than Republicans).

But these are not typical times, and our economic future is deeply entangled with politics. A Trump presidency fundamentally challenges the future of globalization and status quo capitalism. Indeed, the fact that Trump grabbed an unexpected share of minority vote, as well as some college educated women, speaks to the fact that economic anxiety is about more than just income levels. It’s about the fact that a large percentage of the population—not just factory workers in Michigan or Ohio—feels that we have a rigged economic system that disproportionately benefits the U.S. and global elite. And of course, no one epitomized that elite more than the Clintons.

In this sense, the Trump victory is quite similar to the U.K.’s “Brexit” vote to leave the European Union. People aren’t voting for a clear set of policies so much as they are voting against what’s come before. As Allianz chief strategist Mohamed El-Erian put it to me, Trump’s victory is, “yet another illustration of the politics of anger, and of the mistrust in the establishment. It speaks to the stress and strains that western economies are experiencing in the aftermath of too many years of low and non-inclusive growth. The result in a higher risk of breakage, be it economic, financial, institutional or political.”

So what does that mean for the markets, and the economy, in the short, medium, and long term? For the next few weeks, you’ll see plenty of–surprise!–volatility. The markets, which have never been great at predicting populism since the people trading in them are mainly elites, will be up and down depending on how Trump communicates. If we see more of the relatively balanced tone of his acceptance speech, we’ll see gains. If you hear populist rhetoric around trade, immigration and so on, the markets will dip. The uncertainly investors feel will magnify any small bit of bad news. If the next round of jobs numbers comes in soft, or Chinese manufacturing figures look weak, or it seems as though Italian banks might blow up, the markets will react more strongly than they have previously. So, buckle in, as it will be a bumpy few weeks.

Beyond that, investors will be looking for signs of what real policy implications of a Trump presidency will be. It’s quite likely for example that if President Obama tries to push through the TPP trade agreement in a lame duck session, Trump would use this an opportunity to inflame trade rhetoric and brand China a currency manipulator. That could galvanize the flight of capital from emerging markets that has already destabilized, for example, Mexico (the peso is as weak as its been in over 20 years). While that country can probably weather such a storm, other Asian nations could end up having trouble servicing debt, which might then set off a domino effect of collapsing global asset prices. There is, after all, more debt out there in the world than there was before 2008, and much of it is held by emerging market nations, and pegged in dollars.

There’s little doubt that American businesses and consumers, which had been the best hope for a stronger recovery (the thinking being that as the economy strengthened, they’d once again start spending), will batten down the hatches. Confidence will likely fall, as will both corporate and consumer spending. There’s little chance US growth will hit 2 % this year – let alone the 4 % Trump promised on the campaign trail. That’s bad news for the world, since the US is still the global economic growth engine. You might see a replay of the trend we’ve seen over the last several years, where US stocks become a kind of safe haven, the prettiest house on the ugly block that is the global economy. But that will likely mean simply less losses than other markets might suffer – rather than the gains of the last few years. A new era of slower growth has already begun. And if Trump delivers what he’s promised over the last year – unfunded tax cuts, tariffs, barriers to immigration and a large dose of economic populism without any real constructive job creating policy behind it – his presidency will make it slower still. 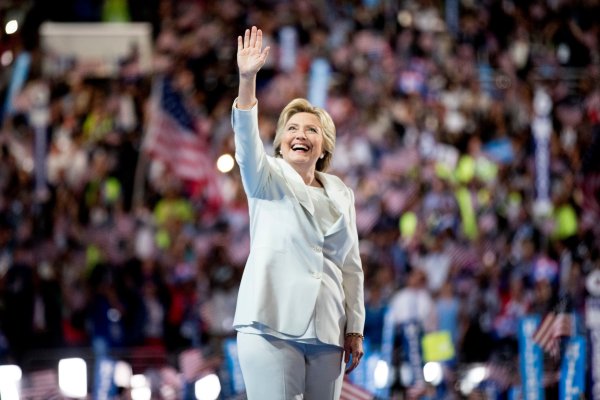 The Overlooked History Behind the Movement to Wear White on Election Day
Next Up: Editor's Pick