The Unexpected Way Donald Trump Is Like Barack Obama

Scenes at an election night party for Republican President-elect Donald Trump on Tuesday, Nov. 8, 2016 in New York's Manhattan borough.
Dina Litovsky for TIME
Ideas
By Michael Ashcroft
Lord Ashcroft is a businessman, philanthropist and pollster who served as deputy chairman of the Conservative Party in the United Kingdom from 2005–2010.

Last week I argued that Donald Trump was like Brexit in three ways: both harnessed a desire for real change; voters balanced the prospect of that change against an unquantifiable risk; and many in politics in the media failed to understand that reasonable people might vote for something the establishment thought unthinkable.

Now we can add two more. The fourth is the dawning realisation, as the results pile up during the night, that something unexpected is happening and that the polls and pundits have once again been confounded. We don’t yet know why the numbers were wrong – whether “shy Trumpers” declined to reveal their true voting intentions, or if pollsters miscalculated the numbers on each side who would actually turn out. But as with Brexit, elements of the media seemed to be closer to the political class they cover than the people on whose behalf they are supposed to hold that class to account: reporting of things like early voting, Hispanic turnout and the Democrats’ supposedly superior ground game all fed their confirmation bias towards what they saw as the only conceivable result.

To be fair, looking back over my focus groups in swing states for the Ashcroft In America project, it would be a bit much to say we saw it coming. But we can see how it happened.

It was in Wisconsin, of all places, where we first heard the echoes of Britain’s EU referendum: the yearning for a new direction, and the feeling that those who wanted it were more motivated than those who preferred the status quo. It was here, too, that we encountered the scale and depth of antipathy towards Hillary Clinton, whom many outside the U.S. saw as the obvious candidate. In more than a decade of research in Britain I cannot recall hearing a politician being described as “evil”; in America we heard it several times in the first week.

Even for those who didn’t rule out voting for her, Clinton represented business as usual: a complacent, detached and even corrupt élite which played by different rules from ordinary Americans. If anything, the downsides of Donald Trump were, for many voters, even bigger: his words would divide America further; he had an appalling attitude towards women; he had no policies to speak of apart from building the wall (which most assumed was neither a pledge nor an aspiration but a metaphor); and his unpredictable temperament could have who-knows-what consequences for national security and international relations—he might end up sparking a war, or (in the words of one of our Ohio participants) “smacking the Queen of England’s butt”.

The difference was that Trump also had an upside: he would be a different kind of president, bring a new way of doing things to Washington, halt what many saw as the slide towards a globalist left-liberal political culture (not least in his Supreme Court nominations), and might actually change things for the better for ordinary people. After thirty years in politics, the best that could be said of his opponent was that she was not him. As someone told us a week before election day: “We know we’re not going to get any change with Hillary… A lot of people feel like, let’s roll the dice, and we’re going to have to put up with a whole bunch of bad stuff, but maybe we’ll get some things done with Trump.” The question was whether enough voters would take the gamble; we now know the answer.

Which leads us to Trump-Brexit similarity number five: the question, Now What? Nobody who voted for Britain to leave the EU knew for sure what that would entail, or what the consequences would be. The same is true among those who backed the president-elect. The commentators asking each other what the Trump administration will look like and what it will do are not alone: his voters are asking it too.

People who are worried by the outcome fear the change will be too much. But there is also the hazard, as in Britain, that the change people want may fail to materialize in the form, or to the degree, that they feel they have been led to expect. Just as Britain’s trade relationship with Europe will have to be negotiated, Trump will come up against the thing that some of his more reluctant supporters used to help justify their vote – the limits of presidential power. If, after four years, they judge that America is not being made sufficiently great again, where will they take their disappointment next?

This means another comparison is at least as apt as that of Brexit. By stepping—or diving—into the unknown, 60 million Americans yesterday voted for hope and change. That makes Donald Trump the new Barack Obama. Perhaps not a sobriquet either would have expected.

Lord Ashcroft is a businessman, philanthropist, author and pollster. His research is published at LordAshcroftPolls.com and you can follow him on Twitter: @LordAshcroft 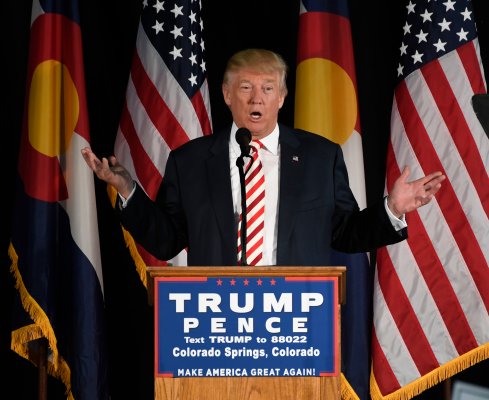 U.K. Bookmakers See Surge of Bets on a Donald Trump Victory—Just Like Brexit
Next Up: Editor's Pick