The Republican’s presidential campaign raised less than half of what Democratic nominee Hillary Clinton did. He ran a fraction of the TV ads, even in decisive battleground states. And although prominent Republican donors came to Trump’s aid during the campaign’s final days, his supportive super PACs and other political groups raised relatively paltry sums when compared to Clinton’s groups.

Somehow, for the volatile, unpredictable New York businessman, that was enough on his way to winning the White House. More than enough.

A swell of white, working class voters, who believed the billionaire when he said he wouldn’t be beholden to special interests, propelled him in a manner that defied polls and the predictions of pundits relying on conventional wisdom for how to win elections.

Trump edged Clinton in the swing states of Florida, North Carolina, Ohio and Pennsylvania and snatched Wisconsin, a state expected to serve as Clinton’s bulwark against a Trump surge. He promised to “drain the swamp” that is Washington, D.C., and its lobbyists and professional politickers.

In a victory speech delivered in the wee hours of Wednesday morning, Trump credited his victory to voters “who want and expect our government to serve the people, and serve the people it will.”

Now, Trump has to prove it.

From Trump’s first day on the trail, when he rode the Trump Tower escalator down to announce his bid, the first-time candidate told voters he would be different. He was running against the establishment — Republican as much as Democratic.

And that, he promised over and over through months of Republican primaries, wouldn’t be him.

“I really like the Koch Brothers (members of my P.B. Club), but I don’t want their money or anything else from them. Cannot influence Trump!” he tweeted.

Meanwhile, his Republican primary opponents were on the money trail, setting up officially sanctioned super PACs and courting big donors.

The money didn’t help, the super PACs weren’t enough and Trump endlessly mocked his opponents for toadying to big donors.

“I wish good luck to all of the Republican candidates that traveled to California to beg for money etc. from the Koch Brothers. Puppets?” he tweeted in August 2015.

Trump insisted he would self-fund and could spend as much as it took.

“By the time it’s finished, I’ll have more than $100 million invested,” he insisted during the second general election debate, a figure he repeated throughout the race. He put in about $46 million of his own money during the primary, much of it in loans he eventually forgave.

Voters loved it. They rewarded him with the Republican nomination. But after securing the nomination, Trump’s tone changed.

In Clinton, he faced a candidate with a fundraising operation unparalleled in politics. Her campaign alone raised $510 million, more than twice Trump’s $255 million, and, together with outside groups supporting her bid, ran 75 percent of the more than 500,000 broadcast and national TV ads aired in the presidential race.

Trump essentially embraced big-money vehicles such as super PACs, although combined, groups supporting him raised a relatively scant $60 million through Oct. 19. He courted big GOP donors such as casino magnate Sheldon Adelson. His own contributions slowed and his fundraising events sped up. And donors gained influence.

New York investor Robert Mercer and his daughter, Rebekah, who oversaw one of the earliest super PACs to swing support his way, convinced Trump to reshape his campaign leadership, appointing operatives with close ties to them.

In the end, Trump put in a relatively paltry $66 million of his own — about $1 of every $4 raised by his campaign. And he never aggressively courted donors in the manner Clinton and her backers did.

According to campaign finance filings, Trump raised at least $67 million from small-dollar donors who each gave no more than $200. Many of these contributors had purchased Trump’s iconic “Make America Great Again” hats from his campaign, or other merchandise, such as the set of three “Hillary for prison” buttons sold by his campaign for $6.

Trump spent the general election wildly outspent and facing a seemingly endless stream of ads from Clinton and her allies.

In Florida, the No. 1 target in the ad war of Team Clinton, Clinton and her allies accounted for more than 75 percent of the 121,000-plus TV ads aired during the general election, according to a Center for Public Integrity analysis of advertising data provided by ad tracking firm Kantar Media/CMAG.

In most of the high-profile swing states, the story was the same. In Ohio, Team Clinton was responsible for about 75 percent of the 79,000 TV ads aired in the race since mid-June, after the primaries had ended.

In North Carolina, Team Clinton was likewise responsible for about three-quarters of the 63,000 presidential race TV ads since mid-June.

And in Pennsylvania, Team Clinton was responsible for nearly three-fourths of the 58,000 or so presidential TV ads that aired there since mid-June. The only exception: Wisconsin.

In the Badger State, Trump and his allies were responsible for about 60 percent of the roughly 10,000 TV ads aired in the state between June 12 and Nov. 6, according to a Center for Public Integrity analysis of data provided by ad tracking firm Kantar Media/CMAG, with the ad blitz beginning in mid-September.

The last time Wisconsin supported a GOP presidential nominee, Ronald Reagan was on the ballot.

Spearheading the Republican push: Diane Hendricks, the richest woman in Wisconsin, who gave nearly $5.5 million to a super PAC that spent millions on ads in her home state, attacking Clinton and Russ Feingold, the Democratic candidate for U.S. Senate. Both lost in Wisconsin on Election Day.

A few big donors began putting real money into ads supporting him in the fall, through a super PAC, Future 45, and a related nonprofit group that does not reveal its donors. Big donors included Adelson and Joe Ricketts, the billionaire founder of TD Ameritrade. The two groups together aired more than 9,000 ads, many in Florida.

In addition, Trump far outstripped Clinton in free media, with cable channels carrying his rallies live and his every tweet making news in a race that turned both ugly and personal. “Lock her up,” supporters chanted at rallies, referring to Clinton.

His lean campaign relied heavily on the Republican National Committee’s turnout operation — a strategy that paid off.

Big money can backfire as Democrats, who have often fought for dramatic campaign finance reforms, are painfully learning.

The benefits are as significant as they are obvious: a candidate may hire superior staff, purchase more ads and run longer and harder than an opponent.

But the drawbacks proved to be equally profound for Clinton.

Although she routinely decried the U.S. Supreme Court’s Citizens United v. Federal Election Commission decision, she became one of its chief beneficiaries by building a massive money-making machine that fully exploited the high court’s ruling.

While she promised to “fight hard to end the stranglehold that the wealthy and special interests have on so much of our government,” her campaign and supportive super PACs solicited huge sums from elite political patrons.

And despite her railing against “secret, unaccountable money in politics,” the super PACs supporting Clinton collected eight-figures worth of money from sources trading in cash that’s tough, if not outrightly impossible, to trace.

Money also couldn’t adequately mask what many voters perceived, fair or not, as Clinton’s damning flaws.

There’s her penchant for secret-keeping, be it delivering private speeches to Wall Street executives or shielding her State Department emails from public scrutiny. And her Clinton Foundation wooing of the ultra-rich and unsavory foreign governments undercut her pledges that she’s represent the interests of who she once half-heartedly (and ham-handedly) described as “everyday Americans.”

Bernie Sanders’ surprisingly strong challenge to Clinton in the Democrats’ presidential primary was largely fueled by liberals’ reaction against what many considered Clinton’s insincerity on matters of political money and influence.

After Clinton vanquished Sanders, a U.S. senator from Vermont, she never quite captured his supporters’ energy and enthusiasm for her own purposes.

Trump, meanwhile, repeatedly hammered Clinton as “crooked” liar most interested in her own power and prestige.

No matter that Trump belittled his opponents, exaggerated his charitable giving, refused to release his tax returns and was caught on tape describing how he’d sexually assault women.

The body politic sided with Trump over Clinton.

Trump now turn to setting up an administration, with jobs presidents often turn to lobbyists to fill, and setting an agenda for his presidency.

Voters and campaign finance reform advocates will be looking to see how Trump acts to reduce the influence of money in politics that he decried throughout the campaign.

“To the extent that Mr. Trump, while campaigning, has criticized the current campaign finance system, his only solution offered seems to be more candidates like him who are billionaires and can self finance and that’s not a solution,” said Paul S. Ryan, vice president for policy and litigation at nonpartisan group Common Cause, and a longtime advocate for campaign finance reform.

In October, Trump released a slate of proposals that he said were meant to reform Washington. He called for longer bans on lobbying by executive branch officials, members of Congress and congressional staff. He also said he would move to tighten the legal definition of lobbyists, forcing more advocates to disclose their activities under laws covering lobbyists.

Read More: All the Emotions of Election Night in One Photo

He also said he would ask Congress to prohibit lobbyists for foreign governments from fundraising for political candidates, and seek a constitutional amendment requiring congressional term limits.

Trump has some measure of public faith: Respondents to a Center for Public Integrity/Ipsos poll earlier this year gave Trump higher marks than Clinton on the prospect of them reforming the nation’s campaign money system.

Still, most of Trump’s proposals are a tall order that would require support from Congress. Constitutional amendments are exceedingly rare. And much of the strength of his proposals lie in the details he has yet to flesh out.

In addition, Ryan points out, Trump’s campaign lawyer, Jones Day partner Don McGahn, a former head of the Federal Election Commission, has traditionally battled any restrictions on money in politics.

What Trump thinks about this will be revealed as prepared to move into the White House. 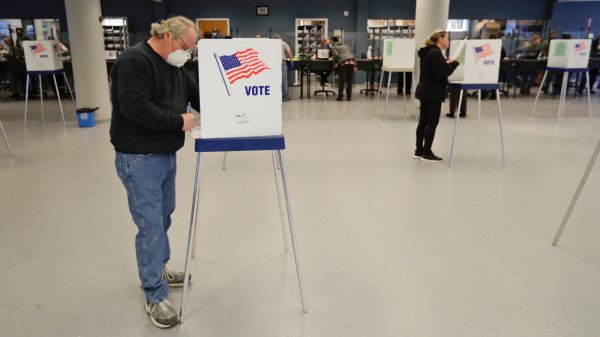