All the Emotions of Election Night in One Photo

OK, let’s break this down. At 9:48 p.m. Eastern, this photo was tweeted from the official account of Donald Trump, the Republican presidential nominee, as his campaign’s inner circle watched the returns trickle in on Election Night in Manhattan. It was right around the time when Trump had taken a lead over Hillary Clinton, the Democratic nominee, in the Electoral College. (Shortly afterward, networks would project he won Ohio.) And it speaks to all the emotions that were playing out across America at that moment.

Front and center is Mike Pence, Trump’s vice-presidential running mate. He’s standing firm, and his wife next to him, in blue, appears happy. Behind Pence’s wife, staring directly at the camera, are Donald Trump Jr., and his wife, Vanessa, who are similarly pleased. Next to Trump Jr. is his sister, Ivanka, and her husband, Jared Kushner. Their faces are less obviously happy. Trump’s wife, Melania, and their son, Barron, seem almost caught off guard. For millions of Americans who support his opponent, that’s a fitting facial expression.

And then there’s Trump. His expression is inscrutable. At that time, he locked up much of the Midwest and was holding razor-thin edges in key states like Florida, North Carolina and New Hampshire.

It’s just one snapshot from a very long night, on a very long day, after a very long year and a half of grueling campaigning, but it contains multitudes. 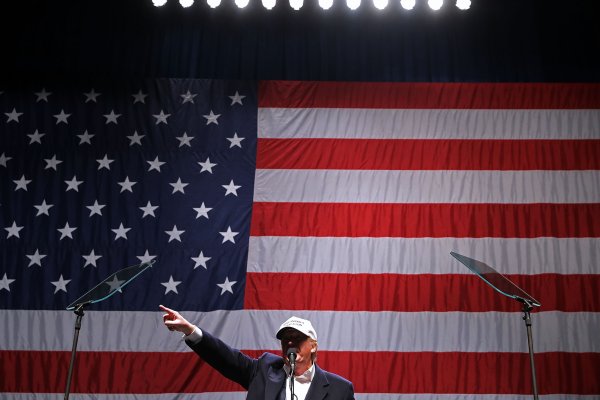