The end of the wildest presidential race in modern political history was in sight Tuesday evening, as American voters lined up for hours to decide whether to elect a political neophyte who marshaled a movement to defeat his better-credentialed Republican rivals, or a woman who is poised to shatter the glass ceiling and is the last barrier between him and the White House.

Turnout was high from coast to coast, with many voters eager to turn the page on a campaign that at times teetered on NC-17. Exit polls showed little optimism about either Donald Trump or Hillary Clinton, and most told the survey takers outside voting locations that they were angry.

Those frustrations were unlikely to fade after the results were announced, and the next President was certain to face a near-impossible task of healing the deep divisions after an election that has been soiled by allegations of corruption against both candidates. Early results showed few surprises, but races were tight in Florida, Pennsylvania and Ohio.

Donald Trump arrived at this moment on Tuesday with momentum on his side amid tightening polls precipitated by a reopened-and-again-closed FBI investigation and rising Obamacare premiums. But Hillary Clinton’s well-oiled political machine has been in overdrive in recent weeks, putting the Republican’s effort to shame at turning out hard-to-reach voters.

Tuesday’s vote will test America’s appetite for sweeping change and shocking bombast, in the face of a cautious wonk who reads the footnotes of the briefing memos that a sprawling policy-boro prepares for her. Trump had Twitter—until his aides took it away from him in the final days—and Clinton has the machinations that rival the White House Domestic Policy Council. Trump campaigned from the gut, Clinton from scar tissue earned over decades in the public eye.

It came down to a revolution from or a ratification of what’s been working for America’s 240-year history. Either way, one member of this unlikely pair was going to shatter the mold of how the country sees its President. What comes next is anyone’s guess.

At an early morning rally in Michigan, Trump made clear his goal: “Today is our Independence Day. Today the American working class is going to strike back, finally.”

Clinton was far sunnier. “Tomorrow we face the test of our time. What will we vote for—not just against?” Clinton said in North Carolina as she wrapped up her second bid for the Presidency. “Every issue you care about is at stake.”

Read More: Watch the 10 Most Notable Campaign Ads of 2016

Tuesday’s vote will answer the question whether traditional campaigns, built on wooing voters with in-person efforts at the doors and on phones, still matter. Trump’s team largely overlooked that but made a late play for it, including a packed phone bank in the basement of the arena where Trump was rallying. But Clinton’s team enjoyed a far head start, and Trump never really seemed all that interested in the mechanics of a campaign that weren’t made for media. Clinton’s aides packed suitcases for battleground states and Trump’s went to have makeup done in greenrooms.

As Election Day dawned, more than 46 million Americans had already voted early or absentee, with both campaigns pointing to favored data-points in battleground states. But even within Trump’s campaign, the former Secretary of State’s demographic and technological advantage was undisputed. The billionaire-turned-candidate was left hoping that public and private polls are wrong, as he looks for a miracle.

Trump spent the final days of the campaign making a last-ditch blitz across the electoral map, searching for luck in Democratic-leaning states such as New Mexico and Minnesota, while looking to shore up support in must-win territory like New Hampshire and Florida. The professionals inside Clinton orbit were left shaking their heads at the newcomers’ optimism, while acknowledging that all predictions to this point had proved wrong.

At an election eve rally in Manchester, N.H., the Republican billionaire seemed nostalgic about the campaign, perhaps doubting his own chances. “I didn’t need to do this,” he said at one of his trademark raucous rallies where he fed on the crowd’s energy. “I’m really happy I did this. It’s been an amazing experience.”

Trump closed his campaign as he began it: nurturing resentment among white voters and promising rafts of wealth if he’s elected. He again said cities are run rampant with crime, schools are terrible, the media are dishonest and the system is rigged. Trump may lose, but not without one last gasp at undermining confidence in the cornerstones of American life. Oh, and he had lasers to enthrall his audiences.

As has been the case from the start, he eschewed discipline and took pride in breaking political norms. He devoted his closing message to mocking Massachusetts Sen. Elizabeth Warren, a progressive darling, as “Pocahontas” and instead bragged about his backing from New England Patriots quarterback and coach even though the facts proved dodgy. ”Is there a better reference than Tom Brady or Bill Belichick?” he asked.

Actually, Clinton would say, yes, and not just because Brady didn’t vote early. Clinton had President Obama campaigning for her in the final hours, along with most of the Democratic Establishment. On Monday alone, she appeared with Jon Bon Jovi, Lady Gaga and Bruce Springsteen, and Beyonce and Jay Z headlined a show for her last week. She packed more than 30,000 people in front of Independence Hall, where President and Mrs. Obama made the case for her as their successor. The midnight rally in Raleigh, N.C., came as a nod to that state’s importance to her strategy to win on-the-cusp states through the brute power of political organizing.

“Our work together will be just beginning,” she said early Tuesday morning.

Read More: Read the 10 Meanest Tweets of the 2016 Election

Americans, by all measures, were ready for this race to end. Billions have been spent on this endless campaign, fueled by two of the most recognized faces on the planet. Trump, a reality show braggart, knew how to stoke populist furor and feed an endless media appetite. Clinton has admitted she is an imperfect candidate and despises the machinations of the circus. A wonk and negotiator, the campaign trail was her least favorite part of the job she’s seeking. Left to her own plans, she would sit with voters in small settings and find solutions to their problems.

Voting began more than a month ago, and the results could be rather quick to become apparent. Clinton has opened up wide leads in some states—up 11 points in the final University of New Hampshire poll—and Trump has fewer paths to the required 270 electoral votes than she does. Even so, the results were unlikely to unify the nation in any appreciable way. Trump’s supporters punctuated his rallies with calls to “lock her up,” and congressional Republicans are already congressional hearings should she win. Clinton’s supporters, meanwhile, would be shellshocked to find polling wrong, preparation irrelevant and the prospect of the first female President thwarted.

Trump and Clinton both voted near their homes in New York, dialing-in to television and radio stations, respectively, to express confidence and push supporters to the polls. Later on Election Day they will await returns just hundreds of feet apart in midtown Manhattan before evening “victory rallies.”

If polls heading into election day were any hint, this duo would again be neighbors: Clinton at the White House and Trump owning the lease a few blocks away at the Old Post Office that he made into a luxury hotel on Pennsylvania, a proxy for proximity to actual power. 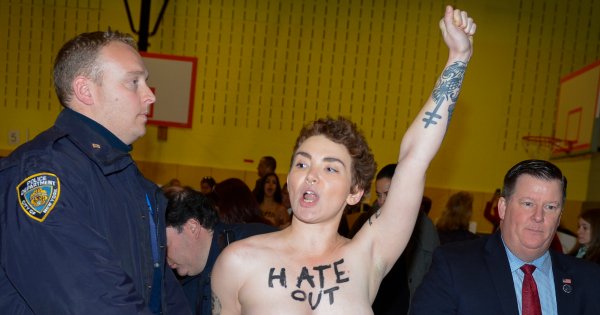 Two Women in Custody After Topless Protest at Donald Trump’s Polling Place
Next Up: Editor's Pick