While the party itself was a predictably cozy-looking balloon-filled affair, as Instagram snaps can attest, there’s one picture of the night that might inspire a double take. It’s Swift and Ansari, posing together as… cats. Why cats? Because both of them came to the party dressed up in black sweatshirts emblazoned with large feline faces on the front.

Swift’s love of cats is no secret; she currently owns two named after TV characters, Meredith Grey and Olivia Benson. Ansari’s affection for the felines, however, is less clear. It can probably be attributed to the fact that the sweater is some good fashion-forward kitsch.

Surrounded by party-hat-bedecked friends like Arrested Development’s Mae Whitman and precocious fashion blogger-turned-actor Tavi Gevinson, Lorde looked to be having a great evening, backed by balloons and a trendy exposed-brick wall.

Swift and model Karlie Kloss sandwiched the birthday girl in a cheeky kiss. Lorde said in her caption she had the “best birthday party I’ve ever had tonight.”

Before the party, Swift posted a handmade card that she designed for her BFF, complete with Lorde’s real name, Ella, and plenty of sparkle.

Lena Dunham tried to snap a glamour shot but instead ended up with this blurry pic. “Tried to get her still but all she wants to do is dance,” Dunham explained in the caption. 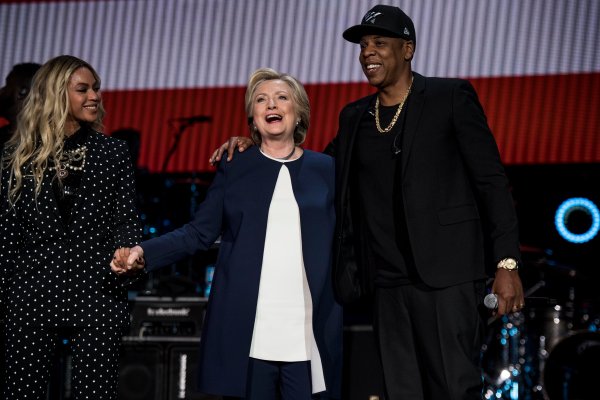 Watch Beyoncé and Jay Z Explain Why They're 'With Her'
Next Up: Editor's Pick