Wall Street surged on the eve of the U.S. presidential election, with Democratic nominee Hillary Clinton’s prospects brightening after the FBI said it would not press criminal charges against her over the use of a private email server.

U.S. stocks on Monday racked up their biggest one-day percentage gain since March 1, while a volatility measure recorded its biggest drop since late June.

The iShares MSCI Mexico ETF, known of late as the “Trump ETF,” soared 5.12 percent and notched its best day in more than five years. The exchange-traded fund is viewed as a barometer for expectations that Republican Donald Trump could win the election since his policies are considered negative for Mexico.

The FBI said on Sunday it stood by its July finding that Clinton was not guilty of criminal wrongdoing, after announcing on Oct. 28 it was reviewing additional emails relating to her use of a private server while secretary of state.

While polls last week showed Trump had been closing the gap, at least five major polls on Monday showed Clinton still had the lead in the race for the White House.

Wall Street had closed lower for nine days in a row through Friday, its longest losing streak in more than 35 years.

Investors have tended to see Clinton as a more status quo candidate. On the other hand, Trump’s stance on foreign policy, trade and immigration has unnerved the market.

“Markets like certainty and predictability,” said Jeff Carbone, co-founder of Cornerstone Financial Partners in Charlotte, North Carolina. “I don’t see another 5 percent bump on a Clinton win, but I could see a 5 to 7 percent pullback on a Trump win.”

The financial sector’s 2.6 percent rise led the gainers among the 11 S&P sectors. Investors expect a Clinton victory would not hinder a potential interest rate hike by the Federal Reserve next month.

Advancing issues outnumbered declining ones on the NYSE by a 4.65-to-1 ratio; on Nasdaq, a 4.03-to-1 ratio favored advancers.

About 7.0 billion shares changed hands on U.S. exchanges, above the 6.7 billion daily average over the last 20 sessions. (Additional reporting by Yashaswini Swamynathan in Bengaluru; Editing by Bernadette Baum and Meredith Mazzilli) 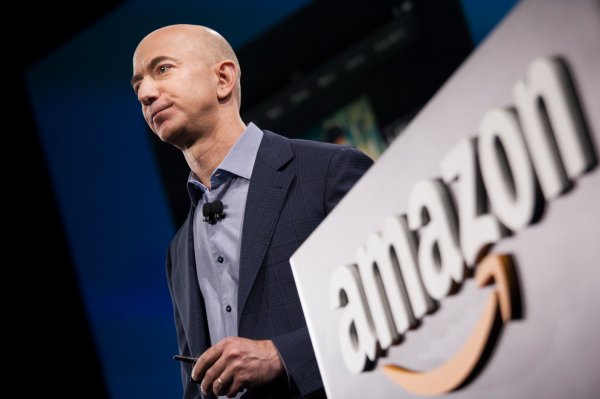 Here's Why Amazon Stock Just Collapsed
Next Up: Editor's Pick