Jill Stein: 'We Have Crossed the Rubicon in This Election'

The Green Party candidate, who has a polling average of about 2% heading into Election Day, chuckled at the prospect of an outright win Tuesday. She said she’s hoping for 5% in election returns, and beyond that, she’s planning to push for reforms in the presidential debate commission and to help pave the way for future third party candidates with a rank choice voting initiative.

Stein spoke to TIME on the eve of the election about what she’s seen from voters this year, how women were talked about in the race and why she never takes vacations.

TIME: If you could stand outside polling places tomorrow and tell voters one last thing before they go inside, what would it be?

JS: Don’t waste your vote on a failed two-party system, invest your vote in a real movement for change.

Right now you’re polling at an average of about 2%. If that’s how the results come in tomorrow, will you be satisfied?

It depends which poll you’re looking at. Because most polls systematically under-count independents, which are now the largest block of voters; they under-count millennials, who are not likely voters because many of them haven’t voted before; and they discount immigrants and people of color. That’s where our strength is. So the polls may be off. The average is not nearly as significant as the trend.

So then short of an outright win, what would make you feel good about your run this year when you see the results come in tomorrow night?

I would say that there have been major breakthroughs in this campaign. The Sanders campaign was a real wake up call that you cannot have a revolutionary campaign inside of a counter-revolutionary party. So many of the Bernie Sanders supporters have joined with us in the Green Party and it’s really been a revival. So many millennials are waking up now to a whole different way forward. I can’t tell you how many times I am told out there on the campaign trail that we are a lifeline for so many people who have kind of otherwise given up on our politics and our future. So I come out of this really excited about where we’re going.

If we get to 5%, to me that will just take it up a whole other level. And it means that we enter into the future starting on November 9 that we have automatic ballot access in most states and that we anticipate a presidential campaign where we have $8 to $10 million right out of the starting gate.

What is the one issue you felt did not get enough attention this campaign?

I’d say most of the important issues were completely ignored by the candidates. And that’s everything from the climate crisis to the endless and expanding wars that are bankrupting us and actually having catastrophic consequences, creating failed states and worse terrorist threats. Climate war and I think the plight of a generation of young people who are locked into student debt, those are probably the biggest issues which were completely ignored. [And] the nuclear crisis we are facing. The real issues at stake here were not even mentioned by the other two candidates.

How has running this year been different than your 2012 run?

It’s been all the difference in the world. In 2012 we were ahead of the curve, in 2016 the curve has caught up to us. It was clear when Bernie Sanders launched his campaign with so much public enthusiasm, that was essentially our agenda from 2012 and he really proved how massive the support is when there’s actually an opportunity to inform and empower the public with that agenda. So that enthusiasm kept coming into our campaign from the get go. We started well ahead of Bernie Sanders and there was a lot of the support at the start. Much of that kind of subsided during the Sanders campaign, but it came back with a vengeance when Bernie endorsed Hillary and so many of his followers had that really rude wake up call.

As the only other woman in the race besides Hillary Clinton, what did you think of this election’s focus on gender and the treatment of women?

I think it’s unfortunate that the issues of particular personalities massively overshadowed the issues that impact all women. Here we were talking about Donald Trump’s pathology, Bill Clinton’s pathology instead of talking about how women are being poorly served, including by Hillary Clinton’s agenda. She talks about equal wages for women, but not about living wages for anybody. She talks about health care for children, but we need health care guaranteed for everyone as a human right. … These are some of the issues that are essential not just for women but for men and for families and for children that can be solved, but this was a campaign absolutely dominated by the very disturbing personality issues of both of these candidates that was allowed to silence the real issues that badly need to be debated.

Do you think the Green Party should allocate more resources to down ballot races in the future as opposed to presidential runs?

As you mentioned before, it was in certain ways an ugly campaign between the two major party candidates. When people look back on the 2016 election, what do you want them to remember?

That in fact this was the breakthrough moment. This was the wake up moment for the American people. When the majority of voters rejected both of the these candidates, when even their own supporters did not actually support those candidates, they were just afraid of the other. I think this is the mobilizing moment, which is in fact we can break that politics of fear. This is such a bitter memory for most people. When people come to our events, they’re usually coming to check us out, they don’t know very much about us, and many of them don’t vote at all. And what we hear from them is that they were so overjoyed to learn that there was a politics of integrity, there’s another way out there, there’s a system that will rid us of this fear campaigning that tells you that you are limited to the greater or the lesser evil. Personally, I feel like we have crossed the Rubicon in this election. The American people have had it. The political system is a house of cards which is falling down.

What’s next for you if you don’t win?

[Reforming] the debate commission, a rank choice voting initiative, [and] we’ll also be working to stop the Trans Pacific Partnership, to prevent the lame duck vote. And we’ll be working to help build the Green Party and support candidates, to do candidate trainings and campaign school to help harness this energy of rebellion which is in full swing. We want to give it structure, give it support, and help people build the institutions and the vehicles we need so we can capture this revolt, this incredible uprising, and actually transform the system to throw the bums out and to create a politics that is actually working for We the People.

Are you going to take a break first, maybe go on vacation after the election?

I have to admit, my family bitterly complains that it’s very hard to get me to take a break. My plan is to just come strong out of the starting gate, hit the ground running and to go into the next phase. This is not a sprint, it’s a marathon, and I think there’s some really exciting breakthroughs that are happening right now that we’re going to continue to push forward on. 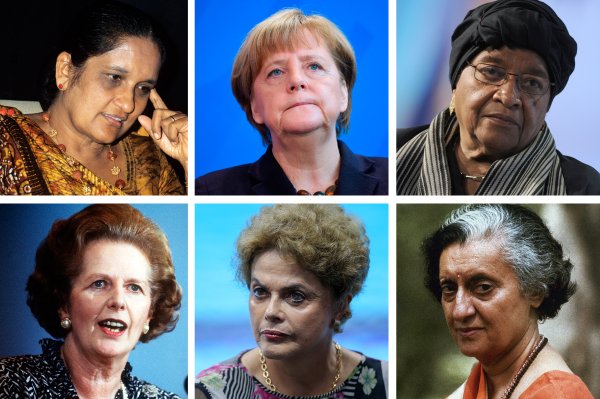 These 59 Countries Had a Woman Leader Before the United States
Next Up: Editor's Pick