A surrogate of Republican presidential candidate Donald Trump accused Jay Z, who performed at a rally for Hillary Clinton last week, of promoting police violence in a video that featured “mazel tov cocktails.”

“One of his main videos starts off with a crowd throwing mazel tov cocktails at the police,” Scottie Nell Hughes said on CNN.

The “cocktail” to which she was referring, a makeshift bomb comprised of a bottle filled with flammable liquid and a means of ignition, is actually called a “molotov cocktail.” Turns out there is an actual “Mazel Tov cocktail at the Washington-area restaurant, DGS Delicatessen. The drink features Prosecco Rose, Averell plum gin, lavender syrup, and lemon.

Jay Z and Beyonce were among many big name performers who appeared at a concert for Clinton last week. Trump seemed particularly perturbed by JayZ’s appearance, accusing the rapper and business mogul of using language that was worse than his own during the concert.

“He used language last night that was so bad and then Hillary said, ‘I did not like Donald Trump’s lewd language,'” Trump said Saturday. “My lewd language. I tell you what, I’ve never said what he said in my life.”

The video Nell Hughes was referencing is for the song “No Church in the Wild,” the first track on Jay Z and Kanye West’s 2011 joint project “Watch the Throne.” Neither Jay Z, West, nor vocalist Frank Ocean appear in the video, which features violent images of clashes between protestors and police officers. The video does feature images of rioters throwing molotov cocktails at police. The song later won a Grammy for best rap/song collaboration.

Nell is not the first Republican to confuse “Mazel Tov” and “molotov.” Wisconsin Gov. Scott Walker faced scrutiny in 2014 after a Hanukkah letter he signed “molotov” when he was Milwaukee county executive was published.

This post has been updated to reflect the existence of a “Mazel Tov” cocktail. 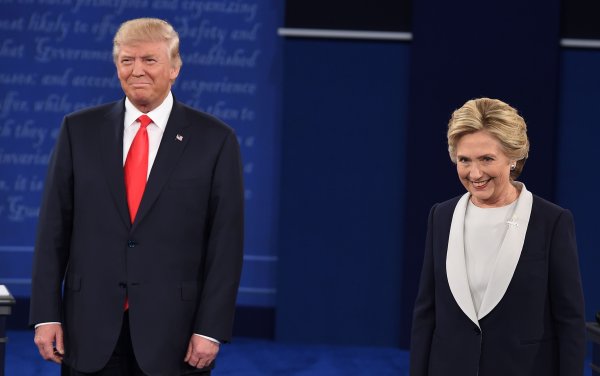 Hillary Clinton Is the World's Choice for U.S. President, Poll Finds
Next Up: Editor's Pick