Hillary Clinton is making the closing argument of the presidential election on prime time television on Monday night.

In a special, two-minute advertising spot to air on the eve on the election, the Democratic nominee, wearing a cream-colored shirt and looking directly at the camera, condenses many of the themes of her campaign into the 120-second ad.

“It’s not just my name and my opponent’s name on the ballot. It’s the kind of country we want for our children and grandchildren. Is America dark and divisive. Or hopeful and inclusive?” Clinton says.

“I want to be a president for all Americans. Not just those who support me in this election. For everyone. Because we all have a role to play in building a stronger, fairer America,” she says.

The ad will play to an audience of an estimated 20 million people on Monday night, a campaign official said, during shows with large audiences: The Voice on NBC and Kevin Can Wait on CBS.

The ad rehashes much of the language Clinton has favored throughout the campaign, and particularly in the final days: hard work, inclusiveness and optimism. “I believe in our people. I love this country. I’m convinced our best days are still ahead of us if we reach for them,” Clinton says.

In recent days, Clinton’s campaign has been airing ads that include Republican testimonials, another featuring the father of a slain Muslim-American soldier, and another with Katy Perry’s song “Roar.”

Her campaign has sought to steer the campaign’s messaging onto more positive messages after a acerbic and negative election season. “This has to be our mission together: To give our kids and every American the chance to live up to their God-given potential. So tonight, I’m asking for your vote. And tomorrow, let’s make history together.” 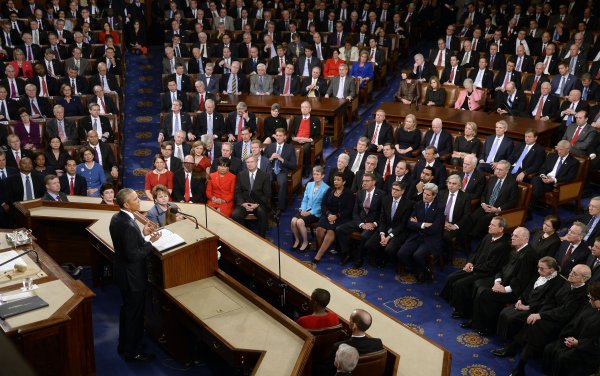 See How Many Men There Are for Each Woman in U.S. Government
Next Up: Editor's Pick