On Instagram Hillary Clinton Is Also a Fashion Icon

“Fun”, “sassy” and “playful” are not generally words you would associate with Hillary Clinton. In recent months especially, the Democratic presidential nominee appeared battle-weary, no doubt hardened from the most vitriolic election season in American history. Seen by some as a “machine politician,” she has struggled to connect with an electorate tired of dynastic politics.

But a cleverly curated Instagram account, dubbed Hillary Street Style (HSS), appears to have succeeded where her campaign has faltered. It shows Clinton as a charismatic woman, never afraid to “do” color or co-ordinate her headband with her pantsuit. It acknowledges the historic significance of her nomination but with stylish flair.

“When I started the account in March, it was meant to purely be fun,” its creator – a female New York-based lawyer (who wishes to remain anonymous) – tells TIME. “Now with a few [hours] to go, I hope it provides a light at the end of the tunnel and perhaps a little extra encouragement to pantsuit-up and vote.” Fun it certainly is. The feed juxtaposes Clinton with famous figures – from Beyonce in lemonade yellow to Princess Diana in turquoise sequins – with clever captions that add a satirical spin. More than a “who wears it better,” the feed makes strong statements about the power of women.

The account is littered with throwback gems, tracking how her looks have evolved over time and reflecting on different roles she’s played both personally and professionally. Clinton may be known as a pantsuit-aficionado but HSS shows off a far more complex style. Could she ever be a real style icon, on a par with say, Jackie O? “I think only time will tell,” says HSS. “However, I do think unlike many style icons, history will be more focused on Hillary’s political achievements rather than what she was wearing at the time.”

While it could be argued that focusing purely on Clinton’s appearance is “reductive”, HSS is clear that fashion and feminism are not mutually exclusive. “I was raised by a very staunch second wave feminist mother and she likes to tell me that she still remembers being dragged into third wave feminism by me as a five year old with my love of Barbies and dress-up,” she says. “This is an Instagram account not a policy analysis. This is as much as about celebrity culture and our society as whole as it is about the election.”

Whatever your views on Clinton, HSS provides some light relief from a campaign fraught with catastrophe. “The US has a longer presidential election season than most other countries and election fatigue is very real even in the most uplifting races,” says HSS. “I think no matter who you support it is important to stay interested and engaged in the election and to be an informed voter. Part of staying engaged (without going crazy) is being able to have fun with the candidates.” 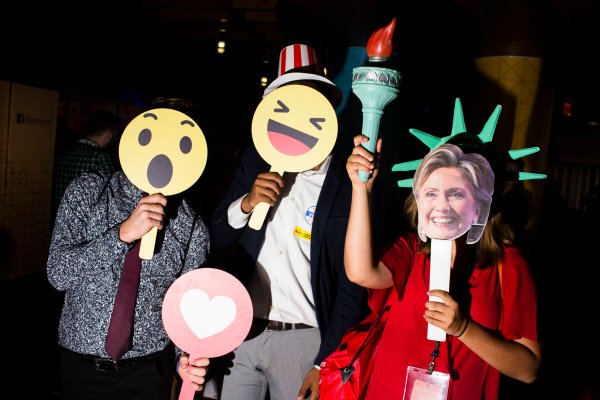 The 82 Most Unforgettable Photos From the Election
Next Up: Editor's Pick