Dark prophecies are more likely to seem credible in church. So when Hillary Clinton took the stage at Mt. Airy Church of God and quoted Proverbs—”where there is no vision, the people perish”—the congregation nodded and said “amen” in solemn agreement.

“This election, in many ways, is about what kind of future our country will have,” Clinton told the members of the black church in Philadelphia on Sunday. “Will it be dark and divisive, calling up the specters of our past?”

But Clinton did not need the Bible to convince them.

In the twilight of the presidential campaign, Clinton’s supporters are terrified about the prospect of a Donald Trump presidency. Dire warnings hang heavily over the Democratic nominee’s events and rallies as election day draws near.

They fear war, nuclear destruction, mass deportation and the collapse of democratic institutions. They call Trump “Hitler” and warn of a new ascent of racism. Months of heated rhetoric from both Democrats and Republicans over the presidential campaign has raised temperature levels, and Democrats are quaking at the prospect of Trump in the Oval Office.

In cities as far flung as Cleveland, Philadelphia, Miami and Manchester, Clinton supporters expressed their fears in the hours before Election Day.

“He is not stable. I think if someone comes at him and challenges him he’s not stable enough to talk something through,” said Janet Love, a retired Cleveland resident. “The whole world will go to hell.”

“I can’t imagine an America with Trump as president,” said Danielle Sculley-Ellett, a history teacher in the Philadelphia suburbs. “He reminds me of Hitler and that scares me.”

“He lacks an understanding of diplomacy and how it works, and I think he is a threat to us and the world,” said Connie Moyers, a physical therapist from southern New Hampshire. “I think he could to a lot of harm to the country and the world for decades to become.”

It has been an emotionally confusing past few weeks. Many of Clinton’s supporters are finding a new burst of enthusiasm for her candidacy, and her crowds have seemed more enthusiastic than ever. After a rally in Manchester, New Hampshire, Clinton greeted hundreds of fans in an overflow room. “We love you!” they screamed and reached out to touch her hands. “We love you forever!”

But polls have tightened. National polling averages show Clinton’s lead over Trump fell from 7 points to within 2 points in the last couple weeks, particularly since the FBI Director James Comey announced the bureau would be investigating additional emails that may be related to Clinton’s server. (On Sunday, he circled back to say the FBI had found nothing in the emails to make it revisit its decision.)

As the election appears uncertain, Clinton’s supporters are questioning Trump’s stability and his fitness for office. They are worried Trump, whose advisers have reportedly confiscated his Twitter to prevent him from starting feuds, would be willing to start an armed conflict over an offense.

Clinton is likely responsible for much of the fear. In recent weeks Clinton has chosen almost as if from a lazy Susan of attack options against Trump, depending on the day, focusing on his rhetoric about women, his unfitness to be commander-in-chief and the language that Clinton says has aroused bigotry and hate.

Her campaign has placed advertisements that warn of nuclear war and Trump’s volatility. She has criticized Trump relentlessly in speeches for months.

This is the most important election of our lifetimes, Clinton assured her audiences over and again. The stakes, she said, could not be higher. “Everything you care about, everything that I care about and I’ve worked for is at stake,” Clinton told her audience at the Philadelphia church.

In recent days Clinton has struck a noticeably more upbeat tone. She has spoken about hope, love and kindness, calling for unity and a progressive agenda where “everybody gets a chance.” Reminiscing about meeting people on the campaign trail over the last 16 months, Clinton said at a rally with basketball star LeBron James that they inspired her. “I love our country and I believe in our people,” she said.

But Clinton’s tone will not reverse months of her campaign’s messaging, nor Trump’s own words.

Trump’s apparent threat to jail Clinton during the second presidential debate still jars the Democratic nominee’s supporters. “His politics are authoritarian,” said Jack Cramer, a 21-year-old Chicago native attending school in Boston. “Threatening to jail your political opponent is not something you see in America. That is a threat to our democratic institutions and I think that’s really serious.”

The last dash before election day has come for both candidates a whirlwind of visits to states. Trump planned rallies in states as far-flung as Virginia, Michigan, New Hampshire and North Carolina. He is concertedly attacking Clinton for alleged corruption, inciting many of the same feelings of dread in his own supporters if Clinton wins.

“Hillary Clinton is guilty, she knows it, the FBI knows it, the people know it, and now it is up to the American people to deliver justice at the ballot box on November 8,” Trump said in Michigan on Sunday afternoon.

To try and help send off Clinton’s campaign on a positive note, the Democratic nominee was joined in the last days of the campaign by a roster of glitterati: President Obama; musicians Beyonce, Jay-Z, Katy Perry, James Taylor, and Jon Bon Jovi; TV impresario Shonda Rhimes and actress Debra Messing. The campaign also announced that at her penultimate Monday night rally in Philadelphia, Bruce Springsteen would perform.

But even the concerts could not cheer some of her more worried fans.

Julie Perez, a 62-year-old tax accountant, attended a Katy Perry concert with her grandchildren on Saturday night in Philadelphia, where Clinton was also scheduled to speak. She and her family sat on the grass high above the city’s Mann Center stadium.

Her young granddaughter cheerily interrupted, saying she was excited to see Katy Perry perform that evening. “This is my first time seeing anyone live,” she said from her grandmother’s lap. 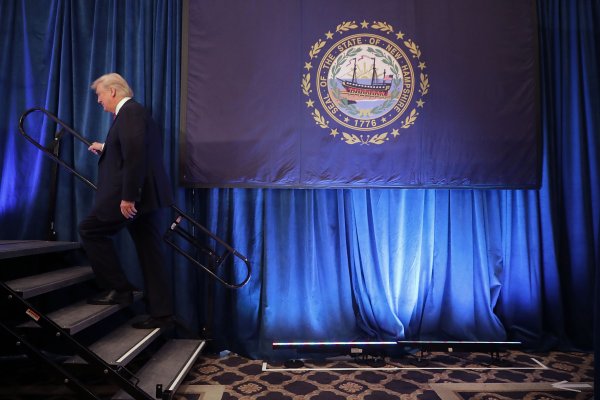