Hundreds of Taiwanese students raise their cell phones with one sign reading "Hold On to Freedom in the Rain" on Oct. 1, 2014, in front of Liberty Square in Taipei to show support for Hong Kong pro-democracy rallies
Ashley Pon—Getty Images
By Feliz Solomon / Hong Kong

A day after Hong Kong pro-democracy activist Joshua Wong was held overnight at a Bangkok airport in early October, a grouping of fellow young activists from across the region issued a statement condemning his detention.

They call themselves the Network of Young Democratic Asians (NOYDA), and draw members from East and Southeast Asia. The names on the list include activists who were involved in the Umbrella Revolution in Hong Kong, the Sunflower Movement in Taiwan and the antijunta movement in Thailand.

Their aim? To reclaim the social, cultural and political narrative of a region grappling with entrenched authoritarianism. They plan to ascend into governments and other institutions. Some of them have already done so, like 23-year-old Nathan Law, who in September became the youngest legislator in Hong Kong history.

Wong and Law are both onetime student activists who co-founded the political party Demosistō. Not long after Wong’s detention in Thailand, the two met TIME in a Kowloon café to share the story behind NOYDA, which was born of a three-day youth congress held in the Philippine capital of Manila in April this year.

“We want to have connections with different activists in the region, to facilitate our mutual support and mutual understanding,” Law says.

The network remained underground until Oct. 5, 2016, when it put out its first public statement of “solemn protest” after the government of Thailand denied entry to Wong, who was due to address students and activists at Bangkok’s Chulalongkorn University on the 40th anniversary of the Thammasat University massacre.

“No one is aware because we’ve kept a low profile,” explains Wong.

Joshua Wong gives a speech via Skype during an event at the Chulalongkorn University campus in Bangkok on Oct. 6, 2016. He was meant to give his speech in person but was arrested and sent back to Hong Kong one day before by Thai immigration
Guillaume Payen—Light Rocket/Getty Images

Wong, 20, a figurehead in the Umbrella Revolution, Hong Kong’s pro-democracy protests in 2014, says he has been networking with regional activists since he spearheaded a massive protest against “patriotic education” in Hong Kong in 2012 — a curriculum regarded by many locally as procommunist brainwashing. The then 15-year-old convenor of student-activist group Scholarism was invited by Wang Dan, former student leader of the 1989 Tiananmen protest in Beijing, to Taiwan to attend a seminar organized by the New School for Democracy.

At that time, Wong met student activist Lin Fei-fan, who later in 2014 emerged as a leader of the Sunflower Movement, a 24-day student occupation of Taiwan’s legislature that successfully forced the postponement of a trade deal with Beijing.

Wong and Lin subsequently met several times, in both Taiwan and Hong Kong, though since two years ago, the Taiwanese activist is no longer allowed to enter Hong Kong. Lin took part in the meeting in Manila this year, and is also a member of NOYDA.

NOYDA has 14 official members, two representatives from each of its seven member-states or regions: Hong Kong, Japan, the Philippines, South Korea, Taiwan, Thailand and Vietnam. (There are also observer states like Burma.)

Hong Kong is represented by Law and Alex Chow, both of whom were leaders of the Hong Kong Federation of Students and important figures in the Umbrella Revolution protests. The members plan to convene annually.

Asian students have long taken inspiration from activism in other countries. “We have seen some evidence that activists are inspired by other instances of nonviolent movements in the region,” says Alexander Dukalskis, lecturer at University College Dublin, whose research specializes in authoritarianism in Asia.

An activist holds sunflowers and wears a sticker of Taiwan's national flag on her face in support of student protesters occupying the parliament building in Taipei on March 21, 2014
AFP/Getty Images

He says many pro-democracy activists in South Korea in 1987 were aware of the 1986 “People Power” movement that ousted Philippine dictator Ferdinand Marcos. “This is not to say that one caused the other, but it is true that international examples of nonviolent resistance can influence activists for better or worse.”

But the degree of cooperation embodied in NOYDA is, many say, a new phenomenon. “It’s always a great thing to find alliance in other countries; it gives each of us more power,” says Rangsiman Rome, director of the New Democracy Movement, a Thai antijunta youth network and a member of NOYDA.

Rangsiman, 24, says that while the space for civil society to operate in Thailand has diminished under military rule — especially in the wake of the Oct. 13 death of Thailand’s King Bhumibol Adulyadej — student organizations, perceived as incorruptible, hold a “privileged position” in Thai society.

With democracy precarious in much of Asia and criticizing a neighboring country’s human-rights conditions unheard of, NOYDA faces an uphill challenge. In addition, some members are not free to travel, and several member states have criminalized certain types of expression.

However, Lin says the network is committed to offering support to all of their members. “We want the Philippines’ government, and Thailand’s government, and other governments to know,” Lin says, “that our generation and our civil society is cooperating with each other, and they are all pro-democracy, and they will all protect the same values and principles.”

“When we feel helpless in our own country,” Wong tells TIME, “don’t forget that there are still people outside of your country supporting you — to achieve the universal values of freedom and democracy.” 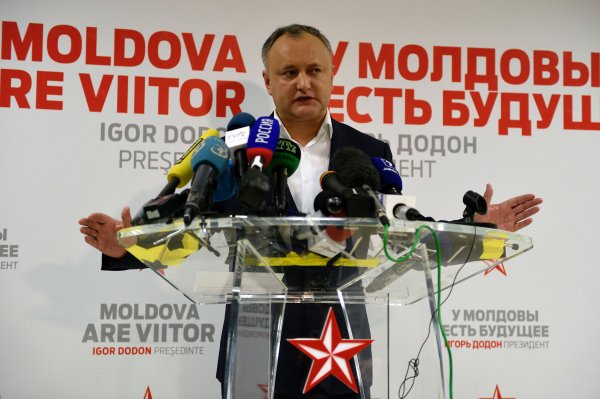 Russian Allies Expected to Win Elections in Moldova, Bulgaria
Next Up: Editor's Pick