Why New Hampshire Could Decide This Election

Donald Trump’s march to the White House could find itself blocked in the tiny New England state that launched it.

New Hampshire and its four electoral votes could be empowered to push the Republican billionaire to the presidency or it could gum up his plans like so much spilled maple syrup. Polls show him essentially tied with Hillary Clinton, and the state’s famously fickle voters tend to make up their minds in the final hours of the campaign.

That’s why Sunday night saw a visit from Democratic nominee Hillary Clinton and musical icon James Taylor. President Obama was heading here on Monday for an election-eve rally at the University of New Hampshire, while Trump was scheduled to close his entire campaign with a rally in Manchester. Tuesday alone could shape what is going to be a history-making day regardless whether a political neophyte who has broken every rule in politics or a figure who shatters the highest glass ceiling in America wins.

Clinton was clearly enjoying herself. Hours earlier, the FBI announced that the last-minute reboot of the investigation into her email turned up nothing new and she was, yet again, in the clear. The damage had been done in states where early voting is prevalent, such as North Carolina, Florida and Ohio. But in New Hampshire, which does not have early voting, the news came at the best possible time.

Trump dismissed it as part of a rigged system to protect the powerful and the connected — ignoring his praise for the FBI when it returned to her email issues just 10 days earlier. “Hillary Clinton is guilty, she knows it, the FBI knows it, the people know it, and now it is up to the American people to deliver justice at the ballot box on Nov. 8,” Trump said at a rally in Michigan.

Clinton advisers were cautiously optimistic about their chances in New Hampshire. The state gave her an almost 2-to-1 defeat in February of this year, but eight years earlier gave her a first win over Obama in their primary. The state is among the best for female politicians — the entire delegation to Washington is female, as is the governor — and gender is not a hobbling factor among most voters. Yet it also put Trump on his path to the nomination. The victory in New Hampshire was his first, and he often calls the state “where it all began.”

New Hampshire also could be where it all ends.

Even as numbers were being tallied, Clinton volunteers had knocked on at least 415,000 doors in New Hampshire this weekend. If predictions from the New Hampshire Secretary of State’s office hold, that means the Clinton team talked to 56% of all likely voters over the course of two days — an astonishing number that reflects the campaign’s well-honed machine.

“The stakes are too high,” said Iris Peterson, a 38-year-old Arlington, Mass., resident who drove to New Hampshire this weekend to volunteer for Clinton. “We’re a two-mom family, and we cannot sit this one out. We have too much at risk if Donald Trump wins.”

Nearby, Andrew Silvia was taking his first ever turn as a political volunteer. The 34-year-old city engineer who lives in Attleboro, Mass., was ready to go knock on doors once he figured out just where he was supposed to go. “I’d feel a lot better if she was winning by 20 points,” he said.

But she’s not. And Republicans counter that they have knocked on millions of doors too. (Democratic candidates up and down the ticket are coordinating, while Republican efforts are more scattershot.)

“Math matters,” former New Hampshire GOP chairman Fergus Cullen said in an open letter to his party about its path forward after Tuesday. “The fundamentals of this race never really changed all year. Trump alienated a considerable majority of women, an overwhelming majority of minorities, and not a small percentage of Republicans. He can’t make up for that by turning out an unprecedented number of grumpy middle-aged white men because there aren’t enough grumpy middle-aged white men.”

That anger, however, may yet surprise Clinton’s team, and the candidate was warning of it during her visit. “Our core values are being tested in this election,” Clinton said grimly. “This election is a moment of reckoning.”

It’s tough to see how Trump can wind his way to the White House without New Hampshire. His increasingly narrow path runs through this state and counts on upsets in unexpected places like Michigan or Minnesota. Even if Trump wins in Florida, Nevada, Arizona, Ohio, Iowa and North Carolina, he still can’t get to the magic number of 270 electors without New Hampshire.

Hillary Clinton, by contrast, has many options to reach 270. Assuming Michigan and Minnesota stay Democratic, Clinton only has to win one of these states: Florida, Nevada, Arizona, Ohio, Iowa, North Carolina or, of course, New Hampshire.

New Hampshire has just four electoral votes, a paltry prize compared with Pennsylvania’s 20, Ohio’s 18 and Florida’s 29. But it’s worth this not so trivial history lesson: had Al Gore carried this state in 2000, the Florida recount would not have mattered and he would have been the 43rd President of the United States. He surely wishes he had a travel schedule that resembled the 2016 hopefuls’ late-campaign visits. 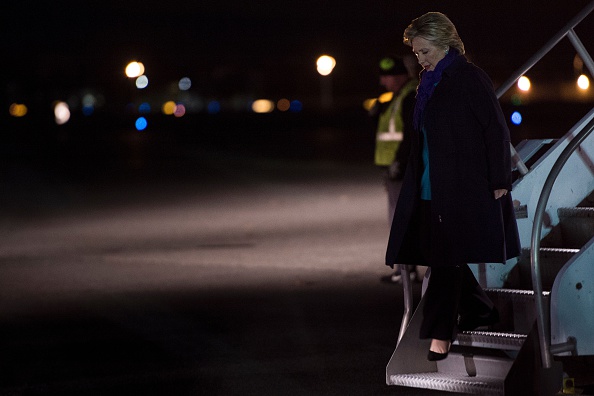