The sketch began as the two appeared once again as Donald Trump and Hillary Clinton to make their final pleas to America ahead of Election Day, as Clinton dealt with numerous questions about the FBI’s recent investigations into her emails.

SNL also mocked Trump’s alleged ties to the FBI, Russia and the Ku Klux Klan, including kisses between Trump and an FBI agent, Vladimir Putin and a member of the KKK.

Toward the end of the sketch, McKinnon’s Clinton listed everything she believes Trump’s campaign has ruined.

“What is happening? Is the whole world insane? Donald Trump has ruined so much of what we, as Americans, hold dear,” she said. “Kindness, decency, Tic Tacs, Skittles, taco bowls, father-daughter dances, buses, bright red hats, the word great, the color orange … men.”

Trump responded with his usual insults directed at Clinton before Baldwin dropped the entire act.

“I’m sorry, Kate,” he said, as the cameras cut to a wide shot, showing both standing close to each other. “I just hate yelling all this stuff at you like this.”

“You know what I think would help us?” McKinnon said, grabbing Baldwin’s hand. “Let’s get out of here.”

The sketch cut to a pre-taped segment as the two ran around Times Square, hugging each other’s supporters and attempting to create unity.

Returning to the SNL stage, Baldwin and McKinnon appealed to the audience to vote.

“We can’t tell you who to vote for, but on Tuesday we all get a chance to choose what kind of country we want to live in,” McKinnon said. 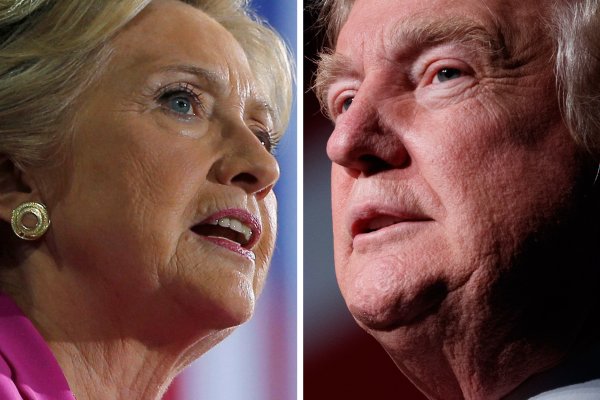 Inside Hillary Clinton and Donald Trump's Final Dash
Next Up: Editor's Pick