Singer Katy Perry speaks during a get out the early vote rally as she campaigns for Democratic presidential candidate Hillary Clinton at UNLV on Oct. 22, 2016 in Las Vegas, Nevada.
David Becker/Getty Images
By Katie Reilly

Hillary Clinton has set her closing campaign ad to Katy Perry’s song “Roar,” airing the spot in key states in the final days of the presidential race.

The minute-long spot features scenes of Clinton throughout her career and on the campaign trail, as well as images of everyday Americans with descriptions of what they’re voting for, including equality, respect and higher wages.

The ad differs from Trump’s closing argument, which struck a darker chord.

“Our movement is about replacing a failed and corrupt political establishment with a new government controlled by you, the American people,” Trump says in the spot, over dark images of Washington D.C. and Wall Street.

Perry has made herself a well-known Clinton supporter throughout the presidential race, performing at the Democratic National Convention, campaigning to get out the vote and dressing up as the Democratic nominee for Halloween.

The pop star is scheduled to appear at a Clinton rally in Philadelphia on Saturday, the day after Beyoncé and Jay Z headlined a concert for Clinton in Cleveland. 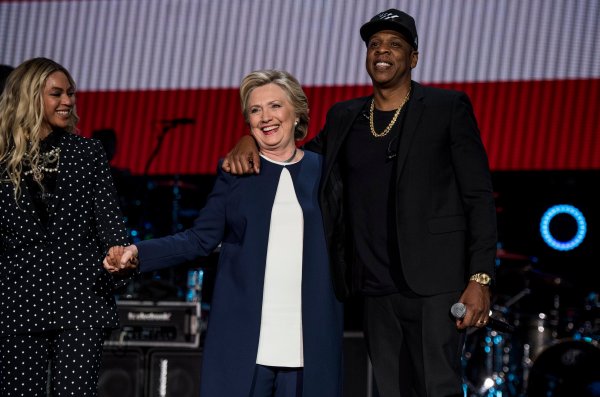