Waco, Texas lawyers Will Hutson and Chris Harris want to help out their fellow Texans with some friendly advice when it comes to getting high—legally. In a beautifully harmonized music video posted to YouTube, the two lawyers (and associate Dan Stokes) share a pleasant ditty about the perils of baking with pot.

“Makin’ pot brownies is a big mistake / If you live in Texas while you bake,” they explain in lilting tones as Harris strums his guitar. (Props help to illustrate the lesson.) Apparently, stringent Texas narcotics laws make it so that most marijuana-related activity, if caught, is considered a felony. And for people choosing to consume their cannabis as an edible—like baking it into brownies, for instance—the consequences can be major, as the total weight of the whole brownie is taken into account, not just the (most likely minimal) amount of marijuana baked into it. As they note: “It’s legally the same as cocaine / That’s insane.”

“If you make a whole tray, you’ll be put away for life / You’ll be punished just like you murdered your wife,” they warn, a bit hyperbolically.

According to the National Organization for the Reform of Marijuana Laws, under Texas law, possession of more than 4 oz. of marijuana is a felony punished by up to two years in prison. More than five pounds can cost you up to ten years. The organization also reports that once you hit a full ton, however, you’re up for a potential life sentence. (Luckily, you’re probably not baking a casual 2,000-lb. brownie.)

In any case, the video from Hutson and Harris is a gentle reminder that not every state is quite as welcoming as Colorado. 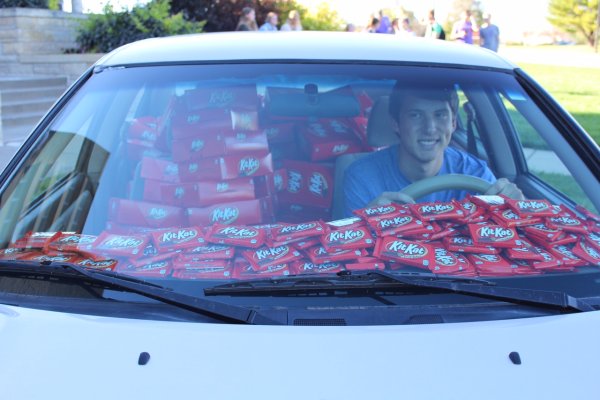 Victim of Bizarre Kit Kat Theft Gets a Pretty Sweet Reward
Next Up: Editor's Pick