Critics, according to some fans, finally revealed themselves as the spoilsport killjoys we’ve always suspected them to be. The most excitement seemed to be generated over the cameos—Wonder Woman, Black Panther, Tom Holland’s adorably pubescent Spider-Man—rather than the main events. Marvel continued to offer the signature wisecracking wit ushered in by Robert Downey Jr.’s Tony Stark as DC Comics appeared, still, to be playing catch-up in the creation of its own cinematic landscape to rival the already teeming Marvel Cinematic Universe. Even Steven Spielberg said (last year) that the trend’s riding the express train to obsolescence.

It wasn’t all bad, of course. The cameos we fawned over mean excitement for what’s to come. Captain America’s epic (but fun!) superhero battle was an all-around crowd-pleaser and just this week, a tide of adulation ushers Doctor Strange into theaters. We have until March (when Logan, the final Hugh Jackman Wolverine movie, hits theaters) to stew over the future of caped crusaders. But for now, here’s what this year’s half-dozen outings have taught us about what’s working and what’s not.

Perhaps the most glaring lesson comes from Batman v Superman: Dawn of Justice. If you were looking to shell out for a movie ticket to escape the doom awaiting you in tomorrow morning’s paper, this was not the one to buy. Although there were plenty of other filmmaking choices to take issue with, the one that clipped these heroes’ capes was how seriously the movie took itself, as though saving the world can’t, even occasionally, be just a little bit fun.

In stark contrast were Deadpool’s extreme self-awareness (“produced by asshats,” “directed by an overpaid tool,” read the opening credits), Doctor Strange’s playful banter and mischievous Cloak of Levitation and Spider-Man’s refreshing lack of ennui, an unsubtle reminder of how many of us used to feel about this superhero business. Marvel merely needs to stay the course while continuing to build; Warner Bros. and DC Comics, meanwhile, are well aware that the dourness must be diminished.

Dialing up the raunch does not dial down the box-office take.

Deadpool’s brand of sardonic humor, delightfully stunted in adolescence and therefore rarely exiting the realms of the bedroom and the bathroom, was not for everyone. But it was for enough of us: despite years of vacillation between a PG-13 and an R rating, stemming from concerns about cutting off an especially eager portion of the audience and leading to various iterations of the script, the movie ended up becoming the highest-grossing R-rated film ever. It maintained a strong pull weeks after opening, unlike Batman v Superman, which saw its box-office haul halved by its second week out.

Without factoring in the just released Doctor Strange, it ended up the second highest-grossing superhero movie of the year, domestically, and fared better internationally than both Suicide Squad and X-Men: Apocalypse despite the fact that Deadpool, who’s been around only 25 years, is not a household name. Not every superhero movie warrants as dirty a take as Deadpool’s, but it’s clear now that cutting off the under-17 crowd is far from a crippling move.

We need our villains clearly drawn.

At least two of this year’s comic-book adaptations were seriously hampered by too vague threats posed by too vague villains. In X-Men: Apocalypse, it was Apocalypse himself: the helmet-headed blue god who just kind of wanted to destroy the world because he wasn’t really into it anymore. This proved neither frightening nor interesting, and it was a particular waste considering the capabilities of the actor underneath the armor, Oscar Isaac.

In Suicide Squad, Cara Delevingne’s underdeveloped Enchantress was unconvincing in her evil aims (more specifically—what, exactly, they were, and why she had them) and ended up looking more silly than scary in her gyrating, panda-eyed sorcery. Jared Leto’s Joker might have filled the void if not for a combination of most of his scenes being cut and the distraction of stories about his method preparations, which undercut the ones that actually made it in. In the end, the heroics of a superhero can only be as exhilarating as the threat posed by the baddie they’re after.

At the end of the day, it’s still about the story.

The comic-book genre has gotten so bogged down in visual effects and increasingly epic action sequences that sometimes the basics get shortchanged. These things are often done well (see Doctor Strange’s visuals, the fight choreography of Captain America: Civil War’s airport hangar scene), but in the end, a fight scene is only as convincing as the motivations behind the characters fighting, and a mesmerizing special effect is less memorable than the human (or superhuman) emotions that spurred the events into motion in the first place.

The comic-book movies that fell flat this year did so largely because of basic failures in storytelling. X-Men: Apocalypse introduces so many storylines—Jean Grey and Cyclops grappling with their newfound powers, Magneto’s tortured feelings about humanity—whose conclusions might land powerfully were any of them really developed. Suicide Squad’s confused plot introduced more questions than it could ever hope to answer. Remove the breastplates and the retractable claws, and one of the chief reasons we’re drawn to superheroes and villains alike is because we see in them our own tortured selves, full of angst and uncertainty, or the selves we hope someday to be. But we can’t connect with just the cape. 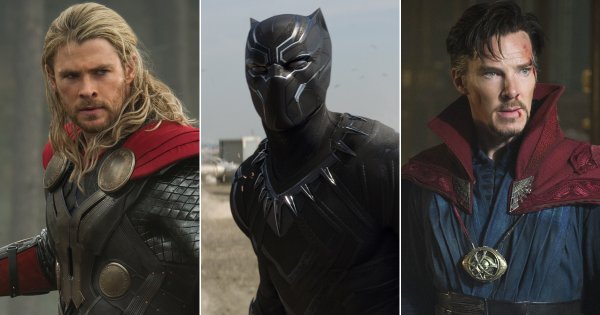 How Doctor Strange Hints at Big Changes for the Marvel Universe
Next Up: Editor's Pick