The Chinese government will directly intervene in Hong Kong’s affairs by offering its take on the territory’s mini-constitution after two rebel lawmakers sparked a long-running controversy and an unprecedented judicial review, Hong Kong’s government said Friday.

On Thursday, the territory’s High Court heard the government’s argument that the Legislative Council’s President should not re-administer the oaths of office to the pro-independence lawmakers Yau Wai-ching and Sixtus “Baggio” Leung, and that the pair’s antics at their first swear-in attempt in October meant they should lose their seats.

Following the hearing, the Hong Kong government released a short statement Friday, saying it was notified that “the question of interpreting Article 104 of the Basic Law has been included in the agenda” for the meeting of China’s top legislative body, the National People’s Congress Standing Committee (NPCSC).

Maria Tam, an NPCSC deputy from Hong Kong attending the meeting in Beijing, told reporters Friday that the Congress’ chairman, Zhang Dejiang, had asked for the interpretation.

“I believe the main reason is because it involves national unity and territorial integrity … and this is a very important issue,” she said, adding that a vote on the matter would be taken Monday, at the meeting’s conclusion.

The announcement ended days of speculation over whether Beijing would directly issue marching orders in the wake of last month’s botched oath-taking by Yau and Leung. Hailing from the Youngspiration party, they were among several youngsters elected to the Legislative Council in September on a wave of sentiment against Chinese encroachment in the territory’s affairs.

Michael Tien, a pro-China lawmaker of the New People’s Party, and also an NPCSC deputy, told reporters Friday that China was “looking at a much bigger picture” — with its decision to weigh in based on, not just Yau and Leun’s actions, but other advocates for Hong Kong independence who had been blocked from taking part in the September election.

“It’s a pity,” prominent barrister and former lawmaker Ronny Tong tells TIME. “I think Hong Kong has clear laws and a healthy judicial system to deal with questions raised by the oath-taking.”

The timing of the announcement and the surrounding circumstances raised many eyebrows, as the judicial review case was being handled by the territory’s High Court, instead of its Court of Final Appeal — Hong Kong’s highest court. In the four previous instances where the NPCSC had given an interpretation of the Basic Law, the relevant cases had all reached the Court of Final Appeal first.

“It seems that Beijing is already jumping the gun,” Anson Chan, the territory’s colonial-era Chief Secretary turned pro-democracy icon, tells TIME. “It’s a very damaging precedent, because it’s not like any of the previous interpretations.”

“The court has not handed down any judgment,” she adds, “so, in effect, what Beijing is now saying is that ‘we don’t care what the court says, we are handing you this interpretation’.”

The pair of young rebels had pledged allegiance to the “Hong Kong Nation” and unfurled banners that read “Hong Kong Is Not China” during their first attempt to take office at the Council’s inaugural meeting on Oct. 12. That, combined with their calling China “Shina” — a Japanese term for the country, now considered an offensive epithet in China after its wartime usage — had seen their oaths invalidated, and had since caused weeks of turmoil and gridlock in the chamber. All this culminated in Thursday’s hearing.

While Justice Thomas Au said at the conclusion that he would hand down a decision “as soon as possible,” China expert Willy Lam, a professor at the Chinese University of Hong Kong, doesn’t think a judgment would come before the NPCSC’s interpretation.

He calls the situation an “existential crisis for ‘one country, two systems’, because Beijing is directly interfering into Hong Kong affairs.”

“To interpret the Basic Law at this time, while we’re waiting for the judge’s decision, gives the impression of disrespect towards Hong Kong’s judicial process and distrust of Hong Kong’s judges,” barrister Tong tells TIME.

“I think if this interpretation was to go ahead, it really will seriously damage Hong Kong people’s trust and faith in the rule of law and the independence of the courts,” says Chan. 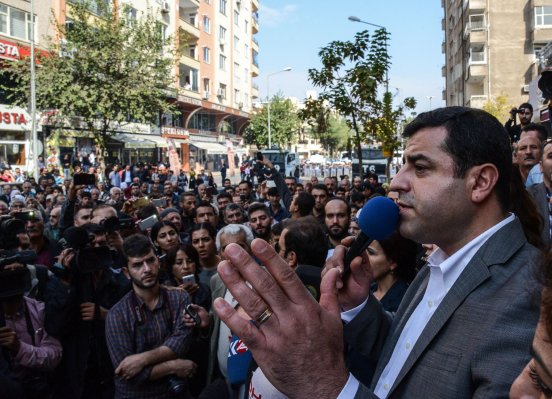 'Kurdish Obama' Detained in Turkey as Crackdown Widens
Next Up: Editor's Pick