The most significant international agreement to combat climate change took effect Thursday evening—midnight in Europe—just days before international climate negotiators were set to meet in Morocco to chart a path forward on the issue.

The Paris Agreement’s entry into force comes a month after countries representing 55% of the world’s emissions committed to joining the deal—the level required to put the agreement into action—and less than a year after negotiators from nearly 200 countries agreed to the specifics of the text at the 2015 U.N. climate summit. Next week’s meeting in Marrakech will provide the first opportunity since that summit in Paris for all parties to the agreement to iron out implementation details.

“Countries of the world shut the door on inevitable climate disaster and set off with determination towards a sustainable future,” said U.N. climate chief Patricia Espinosa and Moroccan Minister of Foreign Affairs Salaheddine Mezouar in a statement. “This is a moment to celebrate. It is also a moment to look ahead with sober assessment and renewed will over the task ahead.”‘

The Paris Agreement provides a valuable framework for countries to address climate change in an international context, but negotiators kicked many of the implementation details down the road, to be determined at later climate meetings, known as COPs. The rapid entry into force put pressure on negotiators to hash out those details sooner rather than later. The details of transparency measures and financing issues—which clarify how countries will meet their commitments and how rich countries will help poorer ones adapt to global warming, respectively—rank chief among the issues that have yet to be resolved completely.

Just as important—if not more so—will be the results of the U.S. presidential election on Nov. 8. A Donald Trump victory over Hillary Clinton threatens to significantly set back international action on climate change—if not unravel the deal entirely—given the GOP presidential candidate’s promise to “cancel” the accord. Withdrawing from the Paris Agreement requires a lengthy process that would last at least three years into a Trump administration, but even U.S. refusal to participate fully—which Trump could do on his own—would weaken the deal.

U.S. officials headed to Marrakech praised the agreement’s early entry into force and expressed optimism about the future of international climate change efforts regardless of who is elected president. “There is a great deal of interest not just domestically, but internationally in terms of what the election outcome will be,” said John Morton, director for energy and climate change for the National Security Council, on a conference call for journalists. But “the international community—the international business community, the international policy community—is moving forward and will continue to move forward.”

But climate officials around the world are less sanguine about what a Trump victory could mean. China’s top climate negotiator criticized Trump’s climate remarks this week and Brazil’s environment minister told journalists he hopes Trump does not win.

“We certainly have a strong climate partnership with China that we expect and hope will continue into the future,” Morton said. “As to the comments that were made, we certainly don’t have any comment on them.”

No matter what happens on election day in the U.S., there is far more the world needs to do to avert dangerous climate change. According to the U.N. Environment Programme’s annual emissions gap assessment, published today, the emission reductions countries pledged to make under the Paris Agreement still leaves the world on a trajectory to warm by 3.4 C (6.1 F) by 2100, well above the 2 C (3.6 F) level that many scientists believe is a rough red line. That degree of climate change would almost certainly be catastrophic for the planet. 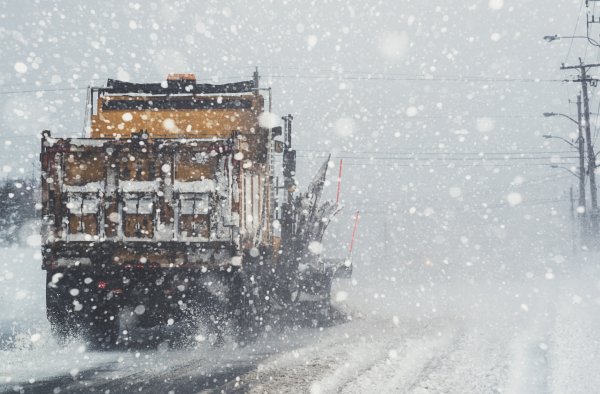 How Warm Winters in the Arctic Make Colder Ones for You
Next Up: Editor's Pick