Hillary Clinton looks on during a campaign rally in Tempe, Arizona, on Nov. 2, 2016.
Jewel Samad—AFP/Getty Images
By Kastalia Medrano

On Wednesday, beloved teen outlet Rookie Mag published a Q&A with Democratic nominee Hillary Clinton. On the eve of likely becoming the first woman to ever win the election for president of the United States, Clinton answered questions solicited by Rookie from readers on topics ranging from student debt to how she manages to keep calm when debating Donald Trump — “Honestly, it took some work,” Clinton shared.

Clinton confirmed that she’d be working with Vermont Sen. Bernie Sanders to alleviate college debt in order to help students to pay pack loans at lower interest rates. To a 16-year-old girl who wrote that she was being harassed in school for being a feminist, Clinton shared the following:

“I’m so sorry you’re dealing with this. In my experience, whenever you take a stand for what you believe, there will always be people who disagree with you. That’s especially true, I think, for women. So please know that you’re in good company. Believe me, every strong woman you admire who has worked to make our world a fairer place has faced opposition along the way. It’s usually a sign that you’re doing something right.”

Clinton concluded her advice with what felt like a big ol’ subtweet to Donald Trump, saying that “when that disagreement crosses over into bullying or harassment, it’s never OK,” and that no one should ever have to feel unsafe.

The former First Lady and Secretary of State also touched on a number of issues that shaped both her own historic path and the daily lives of teen girls around the world. She wrote about being the female minority in male-dominated spaces, being dismissed and belittled and answered questions about Black Lives Matter and the mental health crisis. Basically, she got real about a wider range of topics than you’re likely to find at most presidential debates.

Rookie Mag was founded in 2011 by then-15-year-old blogger Tavi Gevinson as a resource for teen girls. In addition to Clinton, Rookie has conducted interviews with pretty much every public figure from Stephen Colbert to Judy Blume and Lorde. 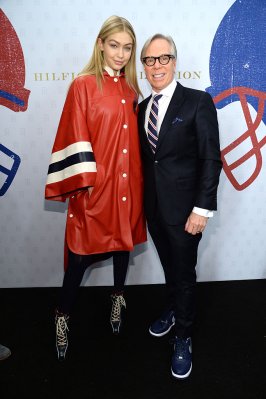 No, Tommy Hilfiger Doesn't Think Gigi Hadid Is Fat
Next Up: Editor's Pick