Jon Huntsman: How to Find Peace After the Election

Former Utah Gov. Jon Huntsman Jr. speaks at the National Clean Energy Summit 7.0 at the Mandalay Bay Convention Center in Las Vegas on Sept. 4, 2014.
David Becker—Getty Images for National Clean
Ideas
By Jon Huntsman
Gov. Jon M. Huntsman, Jr. is a co-chair of No Labels. He formerly served as the governor of Utah and the U.S. ambassador to China

After one of the most rancorous, volatile and strangest presidential campaigns in memory, the prospects for cooperative problem solving among the parties in our divided government might seem remote at best.

Many Americans viewed their choice in this election with little enthusiasm and less hope that the outcome would make things better for them. Democrats, Republicans and Independents, frustrated by years of government failure to make real progress on the country’s biggest challenges, remain pessimistic that Washington will really change.

A Pew poll last year found majorities in both parties believed their side was losing “on the issues that matter,” irrespective of how they fared in the last election. The percentage of Americans who believe the country is on the right track has been below 40% for over a decade, and fell below 30% in the last month of this election. According to Gallup, public dissatisfaction with Washington hasn’t been this deep and persistent since the 1970s.

In poll after poll, year after year, Americans of every political affiliation and level of interest share the same chief complaint: Nothing useful to them gets done in Washington. Government gridlock, more than any other factor, influences the widely held view that politicians serve their own interests not the public’s.

What are the chances this election will have persuaded Congress and the new administration to reassess the unproductive hyperpartisanship of recent years? On the surface, things don’t look too encouraging.

The anger felt by many voters this year appeared as heated and widespread as any election I can remember. Voices on the far left and far right drowned out more temperate calls for bipartisan congressional problem solving and practicing the politics of the possible. They will likely have greater influence in their respective caucuses than before.

And they will receive plenty of encouragement from the most vocal of their constituents, the activists who live increasingly partisan lives, associate mostly with people who share their politics, listen mostly to media that confirms their opinion, and affect national politics mostly through dominating party primaries in safe congressional districts.

Yet, amid all the noise and heat of this political moment, at No Labels we believe change is still possible. We even think it’s more likely than persisting in a status quo that has alienated so many Americans.

We’re not incurable, rosy scenario optimists here. But we do recognize a couple of important truths that might not be apparent to others.

First, there is more public agreement than some in Washington believe about the nature of America’s problems and their solutions. There is even more agreement among leaders of both parties. Most Americans recognize the need to repair and revitalize our deteriorating infrastructure. Both Hillary Clinton and Donald Trump promised to invest more in our roads and bridges and waterways, air traffic control, the electric grid, in the entire superstructure of our economy and way of life.

There is agreement that our tax code should be rewritten to reduce inequities and encourage more investment and job growth. Democrats and Republicans agree we need to improve public education and make college more affordable and accessible. Many in both parties support criminal justice reform. And centrists in both parties—they still exist though in diminished numbers—have expressed willingness to produce fiscally responsible budgets and reduce our national debt.

These are a few areas where cooperation among the parties supported by large public majorities is achievable. The best instigator of that cooperation should be the sense of urgency that every elected official should feel after this election. The anger, fear and desperation felt deeply in many communities prompted the worst impulses of some candidates and made for, at times, a distressingly dismal spectacle of an election.

Some politicians will always answer their constituents’ anger with vitriol, their fear with fear-mongering, and their desperation with predictions of imminent doom. If those voices are allowed to prevail in Washington, and another cycle of paralysis and acrimony commences, and nothing is done to convince Americans that the people they send to Washington give a damn about them, then we should all fear what comes next.

We have exhausted the patience of Americans. That seemed clear in this election. And unless we urgently demonstrate that we can work constructively to help provide more opportunities for them to advance, greater security for their families and a government that is responsive and accountable to them, then the disaffection and anger of 2016 will seem a foreshadow of the disruption and chaos to come.

We are all capable of better. We must prove it by asking as much of ourselves as we demand from our opponents—before the country gives up on us both for good. 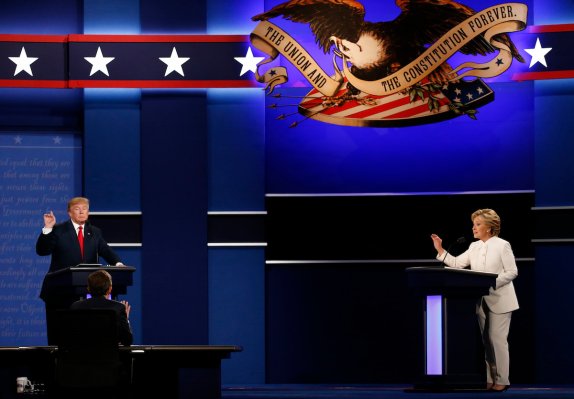 This Writer Ranked American History's Dirtiest Elections. Here’s What He Says About 2016
Next Up: Editor's Pick