Why Hillary Clinton Is the Only Choice to Keep America Great

Hillary Clinton looks on during a campaign rally in Tempe, Arizona, on Nov. 2, 2016.
Jewel Samad—AFP/Getty Images
By Joe Klein

“It is the job of editorial writers,” the late, great Murray Kempton once observed, “to come down from the hills after the battle is over and shoot the wounded.” I’ve been thinking about that as publication after publication has come forward to endorse Hillary Clinton for President–including some that have never made an endorsement before and others that have never endorsed a Democrat. Well, sure: Donald Trump is unendorsable. There hasn’t been a major-party candidate less fit for the presidency in American history.

I’ve never actually endorsed a candidate. It’s not my job. Endorsements are official. They are the prerogative of ownership. But I want to be clear in this crucial year: I will be voting for Hillary Clinton on Nov. 8.

Not happily, even though I’ve known her for a long time, known her to be hardworking, intelligent, moral and sane. Not happily, because I sense that she has been too severely damaged in the course of the 30-year battering she’s received at the hands of extremists and the media. She may be too defensive now to be courageous in office. Her reignited email scandal reminds us that the Clintons come fully equipped with a menagerie, a clown show of paranoid retainers, some of whom should be allowed nowhere near the Oval Office. Clinton is a reminder, too, of the reflexive entitlement that comes with dynastic politics. The Democrats, in general, seem stale. They represent a boundless faith in government that doesn’t acknowledge the corroded inefficiencies of our current system. They practice a form of identity politics–special treatment for special groups–that can be easily perverted, a vulnerability Trump has been exploiting all year.

After all, how far is Trump’s sense of systemic ethnic depredation–Mexicans as rapists, Muslims as terrorists–from Clinton’s view of systemic prejudice, with blacks, Latinos, women, as the victims? They exist on the same spectrum: group identity as more definitive than individual character. Trump’s use of the word the is implicitly vile: “the blacks,” “the Hispanics,” “the Muslims,” “the women” and, yes, even “the veterans.” His stereotypes deny the fabulous array of opportunities that America provides. I’m not sure how real his pessimism–or much else about him–is, but it is ugly and dark in a way this country shouldn’t be.

There is one part of Trump that is indisputably real: his ego. He is personal freedom gone off the rails, a peculiarly American disease. When I think of Trump as a businessman, I think of my father, also a businessman, who would sooner forgo a family vacation than stiff a contractor. When I think of Trump as a celebrity, I think of my daughter forcing me to watch an episode of Jersey Shore some years ago because “you can’t believe how awful they are.” Trump doesn’t live in the same universe as Harry Truman. He belongs to the same universe as Snooki. And his supporters know it: They take vengeful pleasure in his profound lack of seriousness. They protest complexity. Why can’t we take Mosul in three days? Why can’t we have manufacturing jobs and cheap goods at Walmart at the same time? Why can’t we just have immigrants from Europe?

Trump, then, is about all that has gone wrong in our society, and nothing of what has gone right. He is about putting his name on buildings he doesn’t own, about not paying his taxes, about a charitable foundation that spends its money on self-aggrandizement, about beauty pageants where he can invade dressing rooms and ogle nude teenagers. He has even debased the notion of luxury, with his gilt parody of the good life. He does not read. He doesn’t have the patience to be briefed–or, worse, to discern between reality and crazy conspiracy theories, between propaganda and truth. His acceptance of Russia’s attacks on our electoral system is unprecedented and outrageous. He upends stability because he doesn’t know enough to value it. Those who would put Clinton’s failings in the same league as Trump’s depravities are delusional.

From the start, people have said to me, Well, O.K., Trump is about as honest as his hair, but he’s touching a very real nerve out there. True. He is the avatar of easy answers, a leader for those fearful of the unfamiliar. He embodies the notion that engaged citizenship is just too hard for average folks, that compromise is just too complex. He runs, weirdly, against the art of the deal. And he is all ours. He could only happen here. We will have to deal with that, win or lose, after the election. 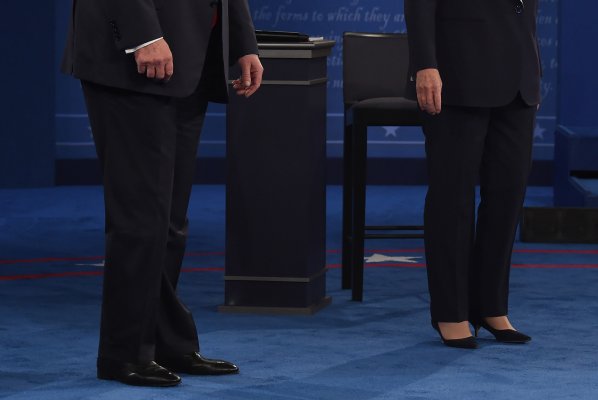 How the 2016 Election Became a Battle of the Sexes
Next Up: Editor's Pick