Big-name book releases are typically greeted with fanfare and enthusiasm. Midnight Harry Potter release parties? Sure. International book tours that keep authors on the road for months? Yep. The dual publication of Elena Ferrante’s Frantumaglia, her new collected writings, and The Beach at Night, her edgy children’s book, is remarkable not only for volume of events but for star power: 64 independent bookstores will host coordinated events across the U.S. Some will feature American authors, like Garth Risk Hallberg (in Jersey City, N.J.) and Bethanne Patrick (in Washington, D.C.). Some will feature celebrities, like John Turturro (in Brooklyn). Some will have panels; some will have group discussions; some, like Brazos Bookstore in Houston, will have prosecco. But none will have the author.

The Italian novelist has been known only by her pseudonym since her first book, Troubling Love, came out in 1992. At the time, Ferrante wrote to her publisher that she believed “books, once they are written, have no need of their authors.” She has guarded her privacy with great care ever since, even as her popularity increased with each volume in her best-selling Neapolitan quartet, a series that began with My Brilliant Friend. And she seems determined to maintain that privacy even after Italian journalist Claudio Gatti claimed on the New York Review of Books website and in other publications to have unmasked her true identity in early October: translator Anita Raja, tracked down by financial and real estate records.

Speculation about Ferrante’s identity intensified with the success of the Neapolitan novels: Raja’s husband Domenico Starnone and Marcella Marmo, a professor in Naples, have been popular guesses. Ferrante’s publisher has neither confirmed nor denied Gatti’s claim. But Gatti’s report, which was published in several European papers, has been widely denounced by Ferrante fans, including many of those preparing to fete her new works stateside. “This was a violation,” says Judith Thurman, a staff writer for the New Yorker who will appear on a panel at Brooklyn’s Community Bookstore. “And it was very much in line with the sort of violations of women that Ferrante writes about.”

The Neapolitan quartet tells the story of two friends growing up in postwar Naples who must fend off physical violence and sexual aggression as they try to escape to a better life. Frantumaglia and The Beach at Night deal with some of the same themes, albeit in very different ways: The Beach at Night, a creepy children’s book more reminiscent of the Brothers Grimm than of Mother Goose, follows a doll who goes on a macabre adventure after her owner forgets her by the shore. The audiobook version, narrated by Natalie Portman, generated controversy because it did not censor some of the mature language, like shit.

Frantumaglia, a collection of adult nonfiction, comprises letters, interviews (by email) and essays. Most of the material focuses on the writing process, and Thurman predicts it will appeal largely to “scholars and hardcore Ferrante fans.” In Frantumaglia, as in her fiction, the novelist illuminates the particular problems for women in the world, writing about how they “have to hold too many things together and often sacrifice their aspirations in the name of affections.”

Women have driven Ferrante sales in America–at Community Bookstore, co-owner Ezra Goldstein says, about 90% of Ferrante customers are women. But even without as much male interest, the books have meant a lot to indie bookstores. My Brilliant Friend was Community Bookstore’s top-selling book in 2015. Jon Purves, director of marketing and publicity at Politics and Prose in Washington, D.C., says indies have been “a key driver of the popularity of these books, because [sellers] have been enthusiastically recommending them to customers with so much passion.” Each bookseller uses the same phrase to explain the Ferrante sales phenomenon: word of mouth. “It was one woman telling another woman, ‘You absolutely have to read this book,'” Goldstein says.

The novelist Roxana Robinson (Cost, Sparta) describes Ferrante as “one of the great writers of the 21st century,” a designation she feels confident about “even [just] 16 years in.” But some admirers worry that we’ve already seen the last of Ferrante’s novels. The author had warned that she would stop writing if her identity were revealed. Some fans say there’s not much cause for concern–rumors that Raja was the real Ferrante have been passed around in Italy for years, so this new report may not change her mode of writing. Hallberg (City on Fire) believes Ferrante’s drive to write is too strong to quit: “Here is a writer of such tremendous imagination and such tremendous passion that even if this were to throw a wrench into the writing process for even, say, 10 years–which would be terrible–I just think this is someone who has something that’s gotta get out.”

Ferrante’s acclaimed translator, New Yorker editor Ann Goldstein (no relation to Ezra), points out that Ferrante says she will always be writing, “but she might decide not to publish anything.” The translator is among the legions wishing otherwise, though: “I hope that she’s sitting at home writing a great novel that she will decide to publish in a year or so.” 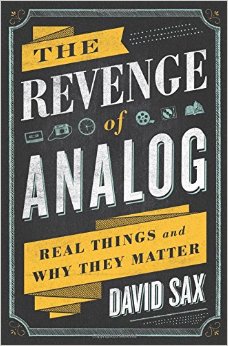 Why Physical Things Matter in a Digital World
Next Up: Editor's Pick