Disney Makes Its Maiden Voyage to the South Pacific

Moana (left) sails out on a daring mission to prove herself a master wayfinder. Along the way, she meets once-mighty demi-god Maui (right)
Disney
By Eliza Berman

In most animated Disney movies, there is a song that introduces viewers to the world the characters inhabit. In Beauty and the Beast, “Belle” tells of a poor provincial town with smelly fish and stale baguettes. In The Little Mermaid, “Under the Sea” describes an aquatic haven where crustaceans and carp are “devotin’ full time to floatin’.” True to form, Moana, Disney’s new animated tale, in theaters Nov. 23, features a scene-setting tune, but somehow the stakes feel higher. “Know Who You Are” takes the audience on a tour of Motunui, a fictional South Pacific island drawn from several ancient Polynesian cultures. The villagers sing of their facility in basket weaving and fishing, offer warnings not to trip on taro roots and count their abundant uses for a coconut. But beyond mere details about the local flora, the lyrics bespeak a Disney movie that may be more rooted in its sense of place than any that have preceded it.

Moana is Disney’s first Polynesian heroine. Dreamed up by veteran directors Ron Clements and John Musker, the duo behind The Little Mermaid and Aladdin, the story follows its teenage protagonist on a journey to save the world, with the help of a tattooed demigod. The idea began with a fascination with Herman Melville’s and Paul Gauguin’s visions of the South Pacific, which inspired a deep dive into the region’s mythology. It was not lost on Clements and Musker that they were two white men crafting a tale about a Polynesian girl, and a 19th century colonial lens wasn’t going to get them very far. So five years ago, they set out for Tahiti, Samoa and Fiji to convene with linguists, choreographers and village chiefs. They hired half-Maori New Zealander Taika Waititi as the first screenwriter and the Tokelauan-Tuvaluan musician Opetaia Foa’i to work on the soundtrack. They cast actors of Polynesian descent–Auli’i Cravalho, Dwayne Johnson, Rachel House–in nearly every part.

The directors focused on the theme of voyaging because, as Musker recalls of the Fijian sailors they met, “It was very much a source of pride to them that they were the world’s greatest navigators.” They cast Johnson as the shape-shifting demigod Maui, a prominent figure in pan-Pacific mythology.

Cravalho, who is Hawaiian, recalls feeling trepidation at the project’s outset: “I was a little wary, which I think anyone would be if they heard that a movie would be even inspired by their culture. We want it to be done right.” There are those who, even before its release, feel it hasn’t been. Some say Maui’s corpulence plays on offensive stereotypes of Polynesians. Recently, Disney apologized for and pulled a Maui costume–which featured a brown tattooed bodysuit–in response to criticism that it constituted full-body brownface and disrespected the sacred tradition of Maori tattoos.

Such scrutiny is familiar to a studio that introduced its first nonwhite princesses in the 1990s and has since strived to correct course on matters of cultural representation. But when it comes to Moana, the loudest cry by far is one of relief. “Can Disney release Moana faster so I can finally have a princess that looks like me?” tweeted one high schooler in July. The water’s been a little choppy, but she’s almost here. 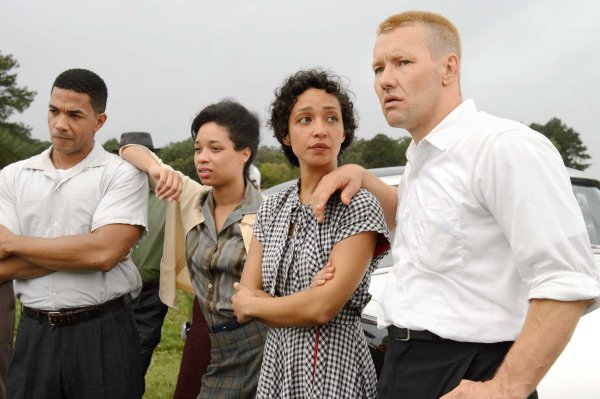 The Rights of the Heart, Interpreted With Beauty by Loving
Next Up: Editor's Pick