The Crown and the True History of Princess Margaret's Doomed Romance

Contains spoilers for The Crown

The Crown, Netflix’s new series about the life of Britain’s Queen Elizabeth II, is anything but subtle. Indeed, the show is rumored to have cost more than $100 million to produce — which would be a record for the streaming service — and not a penny appears to have been spared in the production design.

However, viewers many notice that often major historical occurrences are hinted at, rather than made explicit.

A prime example of this is the burgeoning relationship between the Queen’s younger sister, Princess Margaret (portrayed by Vanessa Kirby), and Peter Townsend (Ben Miles). Townsend, who was more than a decade older than Margaret, was a hero of the Battle of Britain and an equerry to her father, King George VI. He was also a married man with two children. But, while their relationship started off subtly in real life too, it was soon unavoidable public knowledge.

The pair shocked gossips at Queen Elizabeth’s coronation in 1953, the year after Townsend had obtained a divorce, when Margaret was seen brushing a piece of dust from his jacket.

“It was understandable that the gossips had overlooked slim, personable Group Captain Peter Wooldridge Townsend, even though his picture had been appearing in the papers alongside Margaret for years,” a contemporaneous TIME article read. “The gossip columnists who had long sought to probe the secrets of the princess‘ heart simply forgot the Holmesian precept that the most easily overlooked clue is often the most obvious one.”

The prospect that Margaret might wed a divorced man led to public uproar—which only intensified with the news that the Townsend had suddenly been sent off to Belgium, away from Margaret, by the Queen’s private secretary. “British tongues were wagging over the announcement that R.A.F. Group Captain Peter Townsend… had been transferred from the royal household to the post of air attaché in Brussels,” TIME reported in 1953. “British newshens clucked and asked if that was why the Princess looked so sad and wan in her latest pictures from Africa.”

When Townsend returned to London two years later, Margaret was 25 and no longer required her sister’s permission to marry. But she soon was informed by Parliament that marriage to Townsend would require that she surrender her royal income, renounce her claim to the throne and leave England for at least five years. She decided to give him up, issuing a famous statement: “Mindful of the Church’s teaching that Christian marriage is indissoluble, and conscious of my duty to the Commonwealth, I have resolved to put these considerations before any others.”

After she died in 2002, TIME remarked that she “rebounded smartly” from the ordeal, going on to collect “a circle of posh friends — including the actor Peter Sellers, with whom she spent long evenings around the piano with a cigarette holder and cocktail shaker — and made a second home on the Caribbean island of Mustique. A 1960 marriage to photographer Antony Armstrong-Jones, later Lord Snowdon, ended in divorce in 1978. But before it did, she carried on a five-year caprice with landscape gardener Roddy Llewellyn, who was 17 years younger.”

She was also described as “the first Diana, always struggling to play by her own rules,” in her obituary.

“Margaret‘s place in history was assured,” the article continued. “No doubt she was a woman made miserable by the confines of royalty. She also made merry within them.” 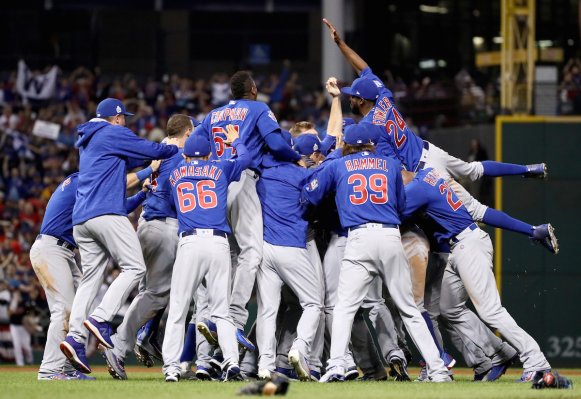 There’s a Little Bit of Cubs in All of Us
Next Up: Editor's Pick