A fleet of eight Russian warships that entered the Mediterranean on October 26 is raising fears that Russia and the regime of president Bashar Assad could launch their most intense assault to date on parts of Syria held by rebels and other insurgents.

Led by Russia’s only aircraft carrier the fleet departed the Barents Sea port of Severmorsk on October 15. The ships could reinforce the Russian military presence in Syria centered on a naval base in the coastal city of Tartus. Since entering the Syrian civil war 13 months ago, Russian air raids have bolstered the regime’s campaign against rebel groups.

But for the exhausted residents of the rebel-held section of the city of Aleppo the prospect of a renewed Russian or regime attack on their half of the city simply represents more of the same after more than five years of revolt and civil war.

“Since the Russians already have a military base on the ground, this carrier wouldn’t make much difference I guess,” says Wissam Zarqa, a teacher living in the besieged opposition-controlled eastern section of Aleppo.

“As for the intention to attack Aleppo, been there done that. Hopefully that wouldn’t stop the battle to break the siege. More civilians and more hospitals to be targeted, that’s all,” he said in a text message.

Launched in September 2015, the Russian air campaign has reinforced the Assad government’s ability to fight back and stall the armed insurrection that grew out of a popular revolt in 2011. Regime and Russian aircraft have extensively targeted civilian infrastructure including schools, marketplaces, and hospitals. A study by the independent London-based watchdog group Airwars found that Russian airstrikes resulted in a claimed minimum of 6,656 civilian deaths as of October 11, 2016.

Russia’s government says it is currently maintaining a pause in airstrikes that has been in force since October 18. But on Tuesday Russian officials suggested the unilateral ceasefire could come to an end if rebels did not end an offensive they are waging in an attempt to pierce the siege of the eastern portion of Aleppo, where an estimated 300,000 civilians are surrounded by pro-government forces.

According to Amnesty International, up to 48 people including 17 children have been killed in the opposition’s offensive which began on October 28. The opposition groups include a broad spectrum of groups of varying political outlooks, but Russia regards the all the groups fighting the regime as terrorist organizations.

“It is time for our Western colleagues to determine who they are fighting against: terrorists or Russia,” said Russian Defence Minister Sergei Shoigu, in televised remarks on Tuesday, according to Reuters. Shoigu also said efforts to revive peace negotiations have been “postponed for an indefinite period.”

Those comments along with the movements of the Russian fleet have heightened speculation that the current lull in airstrikes is coming to an end. Speaking at a think tank in London on Monday, U.S. Secretary of State John Kerry said, “We will see whether the Russians have a greater desire to bomb Aleppo into smithereens, claiming they’re going after a legitimate – the terrorists when in fact there are oppositionists there who are prepared to live by a ceasefire.”

Russian carrier, the Admiral Kuznetsov, is more than 20 years old and is considered a relic of the Soviet era. As a result the ship is unlikely to radically alter the reality of the conflict in Syria, where Russia has already claimed a virtual monopoly over the airspace in the civil war. A separate U.S.-led military coalition also bombing targets in Syria is focused on combatting extremist ISIS militants, rather than intervening in the war between Assad and the opposition.

Nevertheless, some Syrians see the Russian fleet approaching, and also speculate whether a new Russian offensive could be coming, timed to coincide with the November 8 general election in the U.S.

“This is a kind of excuse for America, for the U.S. Anything they do, America will have an excuse. They have an election; they don’t have time to respond to this, to condemn these attacks,” says Abdulkafi alHamdo, another teacher from eastern Aleppo.

“I think this time will be different. They are targeting civilians many times. And this time they are going to make a kind of extermination for civilians,” he says in a voice message sent over Whatsapp.

“We’re not afraid. We’re not scared of such things,” he also says. 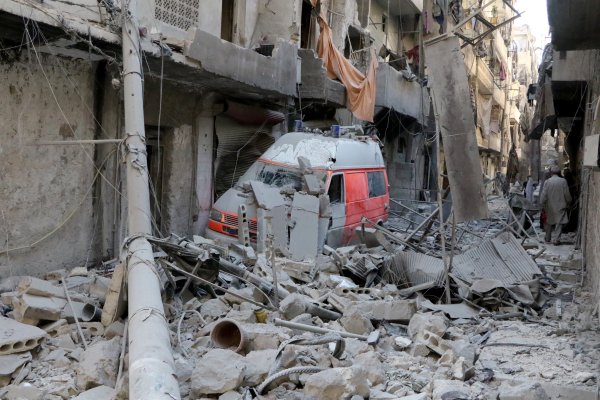 Aleppo Aid Worker: 'I’m Doing This for My Country and My People'
Next Up: Editor's Pick