What You Need to Know About the Crisis in Yemen

Protesters gather outside a hotel where the U.N. Special Envoy for Yemen is staying in, demanding the U.N. to stop the conflict, in Sanaa,Yemen, on Oct. 25, 2016.
Mohammed Mohammed—Xinhua News Agency/Getty Images
By Joseph Hincks

Yemen’s 18-month civil war has killed about 10,000 people, and now it is pushing the country to the brink of famine. More than 21 million Yemenis — 80% of the population — are in urgent need of humanitarian assistance, according to the U.N.

Drowned by the noise of the U.S. presidential election and overshadowed by the conflict in Syria and Iraq, war and hunger have quietly ravaged Yemen. Like those of drowned Syrian toddler Alan Kurdi, face down in the surf, or Aleppo boy Omran Daqneesh in the back of an ambulance, the images of emaciated 18-year-old Yemeni woman Saida Ahmad Baghili beg a neglected question: How did we get here?

1. A humanitarian crisis waiting to happen

Even before the war, Yemen was the Arabian Peninsula’s poorest country. In 2012, some 44% of its population of 25 million were undernourished with about 5 million requiring emergency aid.

Much of Yemen’s poverty is due to dire water shortages. In the capital Sana’a — which some forecast could run out of water by 2017 — less than half of residents are connected to the water supply. Even then tap water only flows about once every four days; and in the southern city of Taiz, it’s once every month. Amid the poverty, political corruption and insurgency seethed. The CIA has long conducted drone strikes against al-Qaeda in the Arabian Peninsula (AQAP) and ISIS targets in the country.

Yet, it seems the world only really started to realize the depth of the crisis last week, when photographs of the teenage Baghili, who is suffering from severe malnutrition, were splashed across international news websites. In one shot, a skeletal Baghili lies in a fetal position on her bed at Yemen’s Al Thawra Hospital. In another, her hands grip the armrests of a metal wheelchair; her cheeks have receded and her skin is stretched tightly over her protruding jawbone.

2. The immediate roots of the conflict date back to the Arab Spring

In the wake of the 2011 Tunisian revolution, protesters across Yemen called for the ouster of U.S.- and Saudi-backed autocrat Ali Abdullah Saleh ­— who, it is believed, had amassed up to $60 billion during his time in office.

Saleh eventually ceded power to his deputy Abd Rabbuh Mansur Hadi in February 2012, but the transition proved rocky: following terrorist attacks in Sana’a, and unrest over food insecurity, Houthi rebels from the north overran the capital — and then Saleh aligned with the rebels.

Hadi fled the country when rebels advanced on his stronghold city of Aden and called for support. In March 2015 a Saudi-led coalition — with intelligence, logistics and later munitions support from the U.S., the U.K. and France — began bombing Houthi positions in support of Hadi’s internationally recognized government.

Yemen’s conflict has been characterized as a proxy war between Shi’ite Iran and Sunni Saudi Arabia, but the situation is more nuanced. Iranian policy analyst Mahan Abedin describes Iran’s conduct as “high on rhetoric but low on decisive action.”

The Houthi, who champion Yemen’s Zaidi Shia Muslim minority, have engaged in intermittent battles against the government — and against Saudi Arabia — for over a decade but grew into a broad national movement following the Arab Spring. When the rebels took Sana’a in 2014 they found backing from many disenchanted young Yemenis, including among some of the majority Sunnis.

Hezbollah — a Lebanese Shi’ite militant group and a loyal proxy of Tehran — has denied military involvement in Yemen while voicing support for the Houthis. But in March a Hezbollah commander said that its fighters were already in the country. “Who do you think fires Tochka missiles into Saudi Arabia? It’s not the Houthis in their sandals, it’s us,” he said.

People stand on the rubble of a prison struck by Arab coalition warplanes in al-Zaydiyah district of the Red Sea port city of Hodeidah, Yemen Oct. 30, 2016.
Abduljabbar Zeyad—Reuters

The actual extent of Iran’s support for the Houthi rebels is unclear. What is clear is that Yemen’s domestic conflict over the inability to produce consensus on power sharing and the structure of a post-Saleh state has now escalated into an intractable multi-party war.

Following the bombing, White House National Security Council spokesman Ned Price said that U.S. security cooperation was not a “blank check,” and that it was reviewing its “already significantly reduced support to the Saudi-led coalition.”

But weeks before — in accordance with Saudi wishes — the U.S. failed to back an independent international inquiry into war crimes committed in Yemen. And on Saturday, another Saudi-led airstrike killed 58 people at a prison complex in western Yemen.

The Pentagon has denied that Washington seeks a wider role in the conflict. However, direct U.S. military involvement in Yemen came within days of the Sana’a funeral bombing. On Oct. 10, the U.S. fired retaliatory cruise missiles at radar installations in Houthi-controlled territory after its Navy destroyer USS Mason came under fire in the Red Sea.

The collapse of U.N.-sponsored peace talks in August, October’s escalation and a recent cholera outbreak that added stress to Yemen’s already failing health care system have led to speculation that the country could become “the next Syria.”

Alexander Corbeil, lead analyst for Ottawa-based think tank the SecDev Group, told TIME that Yemen is unlikely to become a realm for regional power plays in the way that Syria has, in part because Washington and Riyadh have a vested interest in keeping other actors out. At the same time, he forecast “a grinding, protracted conflict with huge humanitarian implications.”

Naji Hussein, a police officer who lives in U.A.E. and had just returned from visiting family in Al Bayda, Sana’a, told TIME in an email Tuesday that most local farms and fields in the area had been destroyed or abandoned. Food prices have also soared: beans that used to cost 60 Yemini Riyal ($0.24) now cost $1.04.

“It’s difficult to live,” Hussein wrote. “We live in fear. We hear the airplanes and we don’t know when the next attack is going to be.” 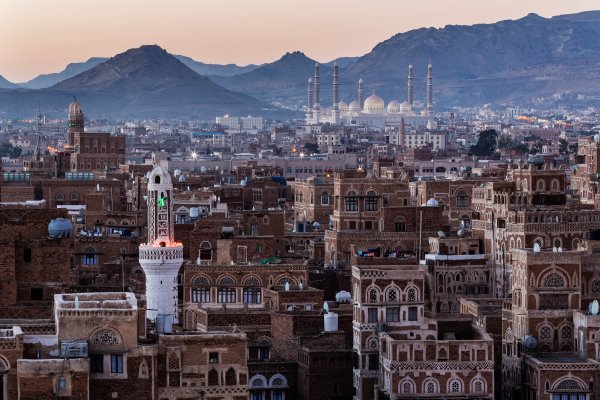 Australian Soccer Coach Kidnapped in Yemen
Next Up: Editor's Pick