A small museum in northwest Kansas that has paid homage to the losers of U.S. presidential elections for more than a half-century is readying a place on its wall for either Donald Trump or Hillary Clinton.

Every four years, the obscure “They Also Ran” gallery in Norton, Kan., adds a new face to its collection of White House wannabes—not to mock their shortcomings but to honor their spirit.

“No one likes the guy who comes in second place, but we’re proud of the people who tried,” said Lee Ann Shearer, the exhibit’s longtime curator. “We’re not dissing you because you didn’t make president. It takes a lot of guts. You almost achieved the highest office in the country and imagine the feeling of defeat when you don’t get it.”

Sixty black-and-white photos of runners-up currently grace the walls above First State Bank, where they’re preserved as the ones who almost won the Oval Office. The 61st frame will either feature the 16-by-20-inch portrait of the gallery’s first female honoree or of a bombastic billionaire.

Shearer hopes she’ll be hanging Clinton on the wall come Jan. 20, 2017, when the gallery hosts its inaugural unveiling of the newest failed presidential hopeful. “It would be our first female here, too,” she said, adding that she lives in a red state. “We’ve had 60 guys. We’d probably like a lady in here.”

“The last two times that we’ve had our inauguration, it has not gone my way,” she added.

Since the exhibit was put in place in 1965, only one presidential runner-up has come close to visiting it. That was Bob Dole, a former Kansas senator, who lost the 1996 presidential election to Bill Clinton.

Shearer said Dole couldn’t see the exhibit because the bank isn’t wheelchair accessible, so she took the photo to him at a nearby community event in 2014.

The curator said she only had about a minute to explain Dole’s role in the museum. “He was just kind of sitting there looking at me,” Shearer said. Then he cracked a smile.

The exhibit has become somewhat of a tourist attraction, luring in guests from all over the country and from places as far away as Germany, according to Shearer. While it is limited by its bank hours—it’s only open on weekdays from 9 a.m. to 3 p.m.—about 250 people visit each election year.

“You never have those almosts all in one spot,” Shearer said. “They’re easily forgotten, but since we have them in place here, they’re not forgotten. They were part of the fabric of our country. If they didn’t make president, they sure worked hard for the country they love.”

And while Trump has hinted that he might not accept the results of the election if he loses, that won’t stop the museum from tacking his mug on the wall. “If he doesn’t concede, it doesn’t mean that Hillary is not the winner so I’m going to put him up,” Shearer said. 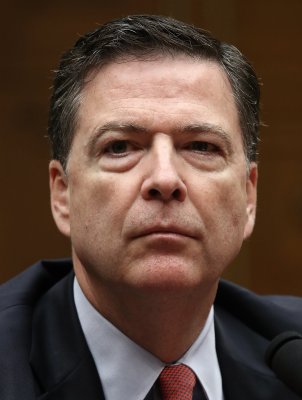 Republicans Up Pressure, Criticism of FBI Head Over Hillary Clinton Email Probe
Next Up: Editor's Pick