The White and Black Worlds of Loving v. Virginia

Richard and Mildred Loving on this Jan. 26, 1965, prior to filing a suit at Federal Court in Richmond, Va.
AP Photo
By Arica L. Coleman

Hollywood interpretations of true events always take some liberties with the truth, but the new film Loving—based on the intriguing story of Richard and Mildred Loving, the plaintiffs of the case Loving v. the Commonwealth of Virginia—adheres relatively closely to the historical account. Writer-director Jeff Nichols’ two-hour film chronicles the nine-year saga of the couple’s courtship, marriage, arrest, banishment and Supreme Court triumph in 1967, which declared state proscriptions against interracial marriage unconstitutional.

The film also, however, sticks close to popular myths that have dogged the case for decades, particularly by contextualizing the story within a black/white racial binary—when in fact Richard and Mildred Loving are prime examples of the way such lines have long been blurred.

This binary construction is nothing new. For example, it can already be seen in Simeon Booker’s Ebony Magazine article “The Couple That Rocked Courts,” which appeared several months after the Supreme Court decision. Booker situated Richard as a white man living in “the passing capital of America,” a place where black residents seemed nearly white too.

In this situation, Mildred—like many of her neighbors—is the one who seems capable of passing into a white world. Some evidence does suggest that she did not always identify as black, and the question gets even more complicated when it came to the Lovings’ children. As a 1966 LIFE Magazine article about the case, “The Crime of Being Married,” notes in a caption, their daughter’s “features are pure white” though their oldest son’s are “heavily Negroid.” (And in fact, as I highlighted in the recent journal article “Mildred Loving: The Extraordinary Life of An Ordinary Woman,” he was not Richard’s biological son, but Mildred’s from a previous relationship.) Because of laws that defined whiteness in absolute terms, the way the children looked did not matter legally, but appearances could be important—and were a topic about which Booker’s audience would likely have had a substantial interest.

Nichols’ film looks at the question of passing from nearly the opposite perspective, focusing on how Richard, though phenotypically and legally white, seamlessly transverses the color line via his geographical and familial connections, socially “passing” as black.

Richard’s ancestral roots were steeped in white southern patriarchal tradition. According to the 1830 census, his paternal ancestor Lewis Loving owned seven slaves. Richard’s paternal grandfather, T. P. Farmer, served in the Confederate Army during the Civil War. Prior to Richard’s marriage to Mildred on June 2, 1958, the Loving surname, at least in Caroline County, was the exclusive property of its white residents. The county court established the couple’s racial identity by their birth certificates: Richard Perry Loving, “white” and Mildred Delores Jeter “colored,” born 1933 and 1939 respectively.

But, while Richard’s race was marked by the physical and legal constructions of whiteness, geographical and social markers also placed him on the opposite side of the color line.

Baz Dreisinger, in her book Near Black: White-Black Passing in American Culture, explores this phenomenon of “reverse racial passing,” which she defines as “any instance in which a person legally recognized as white effectively functions as a non-white person in any quarter of the social arena.”

This was certainly the case for Richard Loving, who lived in a county that was less than 50% white. His father was the employee of one of the wealthiest “Negroes” in the county for nearly 25 years. Richard’s closet companions were black, including his drag-racing partners and Mildred’s older brothers. The latter relationship went from mere friendship to the familial when Richard moved into the Jeter household soon after learning his fiancée was pregnant. When the Lovings were banished from Virginia as a part of their plea deal for violating the state’s anti-miscegenation statute, they returned to Washington, D. C., where they had gotten married, and resided with Mildred’s cousin who lived in a thriving black community on the northeast side of town.

Nichols emphasizes Richard’s lack of connection to white society, and the prevalence of what Dreisinger describes as “moments of slippage,” when white people “perceive themselves or are perceived by others, as ‘losing’ their whiteness and ‘acquiring’ blackness.”

Such moments are poignantly captured in several instances in the film—for example, in a fictionalized encounter between Richard and the county sheriff. (The sheriff, perhaps not coincidentally, addresses Richard as “Boy” a term that has historically been used to emasculate black men.) The sheriff scolds Richard for his marriage to a black woman, then shows pity for Richard’s confusion regarding his proper place within the racial order, a consequence of being born in racially mixed Central Point.

“I’m sorry for you. I really am. All ya’ll over there in Central Point don’t know up from down. All mixed up,” he says. “Half Cherokee, Rappahannock, part Negro, part white. Blood don’t know what it wants to be. You just got born in the wrong place is all.”

In a second instance, Richard is at the local bar enjoying a night out on the town with his drag-racing companions when one of them quips to Richard, “you think you like a black man, but you white. But not now. Now you know what it’s like. You black now aren’t you? You a damn fool.”

In other words, Richard is getting to know what it’s really like to be black, now that he’s experiencing actual discrimination, and he was a “fool” to give up the privilege that his black companions crave.

Rather than setting the black characters close to whiteness, Nichols places Richard so close in proximity to blackness that the community and even his children bear no resemblance to the multi-racial world the Lovings called home.

Richard Loving would attest to the Supreme Court that the only thing they needed to know was that he loved his wife. That was why he married her. And yet there has so often been an urge to go looking for a deeper explanation. Did he marry her because she was basically white? Or because he was basically black? Neither is, taking his own word for it, true. That’s the problem with “passing,” from a historical perspective, and it’s something that the Loving story exposes. Though it may be convenient narrative to say in the 1960s that black Virginians passed visually for white or to say today that white ones passed socially for black, the reality is much more nuanced: both sides sometimes meet in the middle.

But that doesn’t mean passing doesn’t matter. In her book, Dreisinger contends that narratives of racial passing not only demonstrate how Americans “grapple with the color line in intriguing and inimitable ways,” but are also “crucial to understanding how blacks and whites look upon each other whether with awe, fear, desire—or all three. ” Loving will certainly continue a national conversation about race, interracial intimacy and mixed-race identity—even as it places its characters in a binary world. 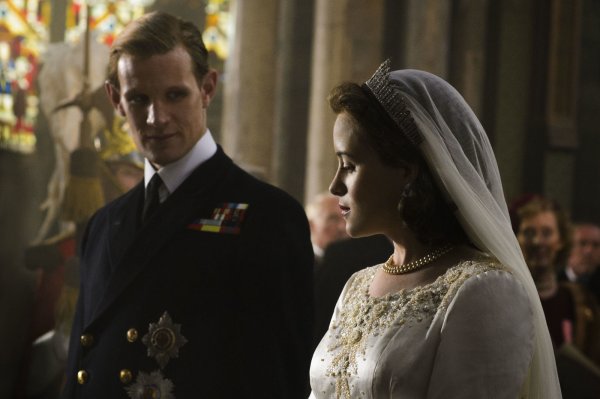 Inside Queen Elizabeth and Prince Philip’s Complicated Marriage
Next Up: Editor's Pick