Your Questions About the New Hillary Clinton Emails, Answered

Friday’s announcement that the FBI is examining additional emails relevant to the investigation of Hillary Clinton’s email server has shaken up the presidential race. With just days before the election, it has resurrected Clinton’s email controversy and given Donald Trump’s advisers new hope.

Here are the answers to your questions about what happened.

In a letter to Congress on Friday, FBI Director James Comey said that the FBI had found additional emails that may be pertinent to the investigation into Clinton’s private email server.

Though he gave scant details, Comey said FBI agents are reviewing the emails to see whether they contained classified information.

Four months ago, the FBI completed an investigation into whether Clinton and her aides mishandled classified information when she was Secretary of State. Comey said in a public announcement in July that “no reasonable prosecutor” would indict Clinton for sending classified material on her private email server. Most believed then that the email controversy was over.

Now with just days before the Nov. 8 election, Comey’s letter to Congress saying that the FBI is examining new emails connected to the investigation has set of a maelstrom of accusations and ceaseless news coverage that could impact the outcome.

Is this what the FBI normally does?

No. The FBI rarely comments on ongoing investigations. And it is unprecedented for the FBI to comment on an investigation into a major-party candidate for president 11 days before an election.

So why did Comey do it?

Comey is sensitive about maintaining the political independence of the FBI and is aware that any move he makes is being closely scrutinized. That has led him to openly discuss FBI investigations in an unusual way.

In July, Comey held a press conference to explain why he recommended not pressing charges against Clinton. Then Comey agreed to testify before Congress about his decision to head off accusations that Comey’s decision was politically motivated. He also released the transcripts of FBI interviews with Hillary Clinton and Huma Abedin.

Now, Comey has calculated that a public letter to Congress is a better option than waiting until after Nov. 8. Putting off an announcement could make it appear that Comey was withholding damaging information to protect Clinton. Or worse, someone within the FBI could leak the news of the new emails just a few days before Nov. 8. Whatever Comey did, he risked being accused of unfairly impacting the election.

Comey has been under even greater pressure to prove his independence after President Obama publicly commented on the email server controversy last October and Attorney General Loretta Lynch was briefly visited on her plane by former President Bill Clinton. Republicans seized on both events to question whether the FBI could be neutral.

Where did these new emails come from?

What are in the new emails anyway?

We don’t know yet. The FBI obtained a warrant over the weekend to search through the new Clinton emails. Of the 650,000 emails on the computer, reports suggest a small fraction could be relevant to Clinton’s email server. Many could be duplicates of emails that have already been pored over by government agencies and journalists. They may not be work-related emails, and it is unclear whether Clinton sent any of the emails, or whether they are even from her private server.

The likely worst-case scenario for the Clinton campaign is that some of the emails found on the laptop were not among the emails she handed over to the State Department, and they contain classified information.

What has the reaction been from Trump, Clinton and other partisans?

Trump has exulted over the news, mentioning it at nearly every campaign stop. “The investigation is the biggest political scandal since Watergate,” Trump said after the news broke. “The FBI never would have reopened this case at this time unless it were a most egregious criminal offense.”

Clinton, meanwhile, has said Comey should release quickly whatever information he has. Other Democrats have blasted the FBI director, accusing him of a partisan meddling in the election. Senate Minority Leader Harry Reid went farthest, saying in a letter to Comey that the FBI director may have violated the Hatch Act, which bars political activity by federal employees. “Through your partisan actions, you may have broken the law,” Reid said.

The FBI is working through the emails to determine whether they contain classified information. Each agency that originated information that the FBI flags will have to conduct its own review, a lengthy process that will likely extend beyond Election Day.

For now, expect both sides to take partisan shots. Clinton’s aides have said their candidate will turn her attention toward regular campaigning, and her allies and Democrats are focusing their fire on Comey. Trump will continue to openly speculate about the emails.

The bad news is that it likely won’t be over on Nov. 8. 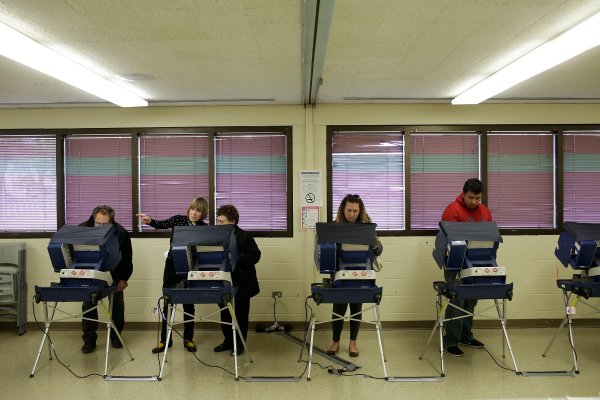 How to Watch Election Returns on the Big Screen
Next Up: Editor's Pick