America Is Better Without Borders

A U.S. Customs and Border Protection helicopter flies over a border fence at the U.S.-Mexico border on a patrol on October 18, 2016 near McAllen, Texas.
John Moore—Getty Images
Ideas
By Steven Hahn
Hahn is a winner of the Pulitzer Prize in History, a professor of history at New York University and the author of the new book, A Nation Without Borders.

“A nation without borders,” Donald Trump has warned us, “is not a nation at all.” Trump was explaining the logic of the multi-billion dollar wall he promises to build along the U.S.-Mexican border, but he was hardly the first to make the case. Years ago, Ronald Reagan said much the same about the threat of illegal immigration, and others urging border vigilance have wrapped themselves in the high-flown rhetoric. Tee-shirts and coffee mugs have turned the idea into a saleable slogan.

There is a deeper point. Nations, unlike other types of states, do define themselves by the territory over which they claim sovereignty and by the borders that mark them off. They set rules about the appropriate social and political relations to be followed, explore and map the physical terrain, enumerate and classify people who live there, privilege certain forms of behavior they regard as “civilized” and exalt ideas of citizenship and belonging that undermine other personal and group loyalties. Borders, at least in theory, make nations what they are and, by extension, what they are not.

Yet, theory and history don’t always coincide. For much of its early history, the United States had hazy borders in good part because through war, conquest and diplomacy the country was constantly expanding and the shifting boundaries were not clearly marked. There was no agreement about how far west the Louisiana Territory reached or how far south the state of Texas stretched or how far north the Oregon Territory extended. Highly charged political words and brutal conflict followed (like the U.S.-Mexican War), while the imperial eyes of many leaders fell on Cuba, Central America and Hawaii.

What’s more, the borders that were agreed upon were remarkably porous. Until well into the nineteenth century, immigrants could come and go at will and even participate in electoral politics if they simply declared an intention to become citizens; indeed, for decades it was not at all clear what a citizen of the United States was. The only international migration policed was the African slave trade, which Congress outlawed in 1808 after nearly half a million captives had been forcibly deposited on North American shores.

This all began to change with the Civil War. In defeating the slaveholders’ rebellion in the South, the federal government began to turn itself into a nation-state. The Lincoln administration enlarged its powers, constructed a national banking system, sponsored new classes of manufacturers and financiers, began to build a transcontinental railroad, territorialized much of the trans-Mississippi West and abolished black slavery. Before long, the Fourteenth Amendment established birthright citizenship while the United States Army crushed rebellious Native Americans and remanded the survivors to reservations.

What about those on the outside looking in? They too would begin to feel the hands of the state. In 1882, Congress officially excluded Chinese laborers, who had helped build the western railroads, from immigrating (they were seen as racial inferiors and heathens), and in 1924 first established quotas based on national origins, largely to stem the flood of immigrants from southern and eastern Europe who were associated with anarchism and socialism. From thereon in, the immigration rules would be juggled, with different groups favored at different times, but the idea of a border subject to patrol became accepted and entrenched—even if observed in the breach.

Still, as a nation-state, the United States has always been interested in pushing its borders out—sometimes very far out. In the 1890s, Hawaii and the Philippines were annexed through coercive means. In the early twentieth century, the Panama Canal Zone was taken out of Columbian hands. American troops subsequently invaded Mexico, Cuba, Haiti and various other nations in Central America and the Caribbean basin to maintain “order” in the hemisphere. In the immediate post-World War II period, the United States established military bases across the globe in a bold attempt to secure what Henry Luce had called the “American Century.” Throughout, it was apparent, as the famed Supreme Court’s Insular Cases of 1901 prescribed, that the Constitution really wouldn’t follow the flag, that the subjects of expanded American power would not be entitled to the rights of full “citizens.” Thus the deeply unsettling example of Guantanamo.

It is easy, when politics and ethnocentrism serve, to proclaim the principle of the nation with borders as the nation itself, while the borders are, in fact, regularly traversed by policy makers, investors and moneyed interests pursuing the main chance and wielding the big stick. Trump himself regularly touts, though refuses to reveal, his international dealings, many of which confound his goal of keeping jobs within American borders if they don’t outright violate American laws.

Truth is that the nation’s prosperity has long rested on the labor and resourcefulness of immigrants—voluntary and involuntary, free and slave—and that those who most loudly denounce a “nation without borders” are likely descendants of immigrants who were themselves harassed for their origins, faith and lifeways at some point in the past. We would do well to recognize that in a global economy such as ours, where the movement of people and goods are the lifeblood of our sustenance, a nation’s security is best maintained not by walling itself off but by lifting the prospects—and thereby creating political allies—of working people around the world. 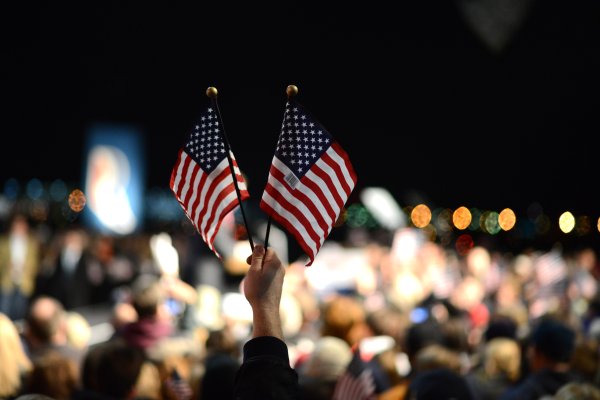 What My Immigrant Family Taught Me About America
Next Up: Editor's Pick