It didn’t take long for Harry Potter fans to compare Donald Trump to Lord Voldemort, the villainous wizard of the Potter universe who made a name for himself using dark magic and xenophobia. Even Potter creator J.K. Rowling, who’s never been afraid to voice her political opinion on Twitter, chimed in after Trump’s call late last year to ban Muslims from entering the U.S.—saying Trump was actually worse than Voldemort. But it took young, liberal Potter fans longer to draw another campaign connection: Hillary Clinton, meet your Harry Potter doppelgänger, Hermione Granger.

Granger, one of the heroes of the series, is the female know-it-all witch who’s introduced in the first Potter book as having “a bossy sort of voice.” Hours before the first presidential debate last month, Paul DeGeorge, a 37-year-old conceptual artist and activist in Kansas, officially debuted a redesign for a website he runs that once bore the name “Nerds for Obama.” It’s now “Nerds for Her,” a site dedicated to framing Clinton’s narrative around popular fictional series like Potter, Game of Thrones and Captain America—and selling paraphernalia to match.

“I, like most people, have had a perception of Hillary that’s been made by a sexist and patriarchal narrative that she’s been victim of,” DeGeorge says. Amid a campaign season that has seen Trump frequently interrupt Clinton at debates, DeGorge adds: “Like Hermione is always the smartest person in the room but gets talked over, so is Hillary.”

DeGeorge was a supporter of Bernie Sanders during the Democratic primary. He says he decided to relaunch his Obama site for Clinton when he realized that one of Clinton’s slogans, “I’m With Her,” sounds a lot like “I’m With Hermione.”

Elizabeth Minkel, a journalist who covers various fan communities and co-hosts the podcast Fansplaining, made a similar connection.

“Just think about the way Harry Potter and Ron [Weasley] talk about Hermione in the first book,” Minkel says. “She’s the most annoying person, she’s the teacher’s pet, she’s deeply frustrating to them and, you know, by the end of the first book she’s indispensable.”

Some die-hard supporters of Sanders or third-party candidates didn’t hide their frustrations with DeGeorge’s site switchover. He saw this firsthand when he rebooted the Nerds for Obama Facebook page as Nerds for Her. He once had more than 10,000 fans but lost about 6% of them after the switch. “Nerds get behind Jill and get all your Nerd and non Nerd friends behind Jill,” one commented, referring to Green Party candidate Jill Stein. “A vote for Hill is a vote for Trump.”

“I knew there were a lot of people who were dedicated Obama supporters who were not interested in supporting Hillary, but I find it disheartening that there could be such a tremendous threat to democracy and people would be willing to fixate on, like, what I would say are pretty minor differences between a candidate they supported four years ago and the candidate running now.”

So, DeGeorge recruited various experts in the fandom field to try to retell Hillary’s story through posts on Tumblr, fan fiction and the merchandise on his site, which ties Star Wars, Captain America, Hamilton, Doctor Who and other fandoms to Clinton. Alyssa Franke, who runs a Whovian Feminism blog on Tumblr and Twitter, volunteered to work alongside DeGeorge to get her followers excited about Clinton.

“Fans have always drawn parallels between the pop culture they love and the world around them, and Nerds for Her makes those parallels more explicit and directed by connecting a presidential candidate we love with the pop culture we enjoy,” Franke says “I could go on for days about all of Hillary’s policies that I like and all the ways that I think she will make our country better, but sometimes it helps to be able to draw that emotional connection to heroines we love and admire.”

Nerds for Her is a for-profit LLC that DeGeorge set up with $10,000 of his own money. For now, he’s trying to break even with what he invested, using money from merchandise sales to get there. DeGeorge is also sending volunteers to nerd conventions across the country and is partnering with the super PAC Not Who We Are, which serves as a hub for groups, companies and organizations to publish open letters rejecting Trump.

DeGeorge is no stranger to fandom, political activism or tying the two together. He launched a band called Harry and the Potters in 2002, and in 2005, co-founded the Harry Potter Alliance, a nonprofit organization that ties fans to activism. He still serves on the Board of Directors. Rowling called the Harry Potter Alliance “incredible” in a 2007 interview with TIME, going on to say: “What did my books preach against throughout? Bigotry, violence, struggles for power, no matter what.”

The Potter politics connection isn’t new, it’s just more palpable this election cycle. Aside from Rowling’s Voldemort-Trump comparison, other stars have spoken up, too. Jason Isaacs, who played Lucius Malfoy in the Potter films, didn’t shy away from tweeting about the first debate, and Daniel Radcliffe even commented on what Trump and Voldemort have in common. Most recently, Emma Watson—who played Hermione in the Potter films—posted on Instagram and Twitter about how the upcoming election “will have ripple effects around the world.” With the recent release of Harry Potter and the Cursed Child—a book version of London’s West End play based on a story by Rowling, Jack Thorne and John Tiffany—Rowling only continued the political storyline, presenting Harry and friends as overworked employees of the Ministry of Magic, the main governing body of the wizarding world.

If DeGeorge has his way—and Clinton has hers—this election will mirror Rowling’s narrative. After all, as was revealed in Harry Potter and the Cursed Child, it was Hermione Granger who grew up to become the Minister of Magic. 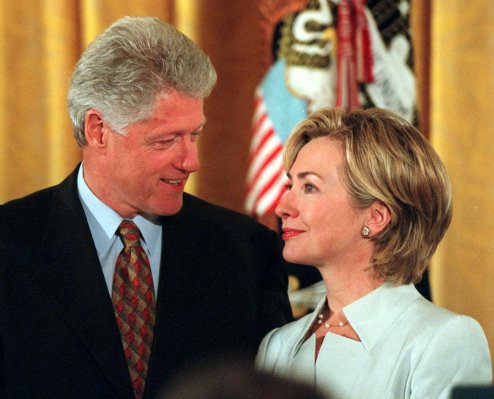 Understanding 'Clintipathy': A Pathological Hatred of the Clintons
Next Up: Editor's Pick