Eight-year old William Ryan is different from most people—he’s a way better dancer.

When Ryan, who has autism, heard about a contest where people could show off in front of a webcam in the hopes of winning a prize basket, he jumped at the chance to show the world his dance moves. Ryan headed to the Cornwall, UK boardwalk and recreated the zombie dance from Michael Jackson’s “Thriller” and completely nailed it, managing to eerily replicate every shuffling step, unsettling head movement, and un-dead gesture. Aspects Holiday, the company that ran the contest, was so impressed with Ryan’s dance routine that they returned to Facebook to add an extra prize to Ryan’s winnings—a free stay in Cornwall.

In response to the outpouring of good wishes for her talented son, Ryan’s mother, Gemma, took to Facebook to explain her son’s passion for Michael Jackson. “Three years ago, when William was five he was diagnosed with autism. He struggled to communicate, struggled academically in school and continues to struggle to socialise and make friends but about eighteen months ago his Dad introduced him (via YouTube) to the wonders of Michael Jackson and he watched his videos for hours on end and learnt all his routines off by heart. He’s never been to a dance school for a single lesson – he finds them too intimidating. He had taught himself how to dance like MJ and absolutely adores him!,” she wrote in a Facebook comment.

When his mother told Ryan about the company’s live webcam feed and competition, he jumped at the chance to strut his stuff. “We mentioned the webcam competition to William and the first thing he said was: ‘Mummy, can I do Thriller please?” she wrote. The rest is viral internet history.

As for anyone else considering undertaking the “Thriller” dance, consider the (sequined) gauntlet thrown down. 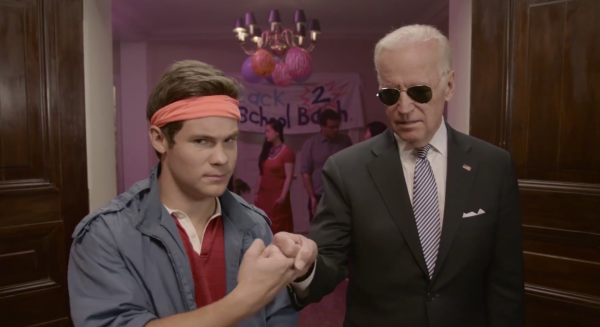 Vice President Joe Biden and Adam Devine Crashed a College Party for an Important Mission
Next Up: Editor's Pick