It’s official: the Olympic golden boy and his longtime girlfriend, model Nicole Johnson, tied the knot over the weekend at a beachside ceremony in Cabo San Lucas, Mexico. Both of baby Boomer’s parents shared snapshots of their big day to Instagram, where Johnson has already changed her name to “Mrs. Nicole Phelps.”

The two have been dating intermittently since 2007, and became engaged in February. Leading up to this summer’s Olympics in Rio, new father Michael was rarely seen outside of the pool without Johnson and their infant son Boomer, who was born in May. Just last week, reports surfaced that the duo had, in fact, been officially married since June, although they were still referring to each other as engaged until recently.

“It kind of already feels like we are married,” Phelps told TIME this fall. “Nicole and I have been dating on and off for so long, so we’re looking forward to making it official finally. We’re both very excited.” It looks picture-perfect. 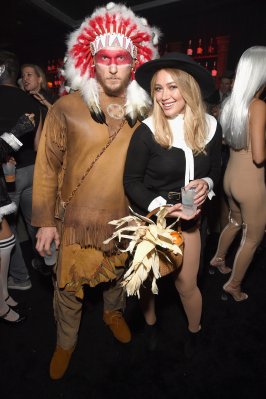 Hilary Duff Is Sorry for Her Controversial Halloween Costume
Next Up: Editor's Pick