Mike Pence on the third day of the Republican National Convention on July 20, 2016 at the Quicken Loans Arena in Cleveland, Ohio.
John Moore—2016 Getty Images
By Melissa Chan

There were no reports of any injuries. Mike Pence detailed the experience to CBS Friday morning: “It was about 10 seconds of uncertainty as we landed,” he said. “Once we were on the ground, you could tell they were trying to stop the aircraft as quickly as possible. It slid back and forth a little bit, then left the runway.”

It’s unclear what caused the plane to slide, though the area had been hit with significant rainfall. Officials temporarily closed the airport after the incident.

“There were no injuries tonight when a charter plane carrying Republican Vice Presidential Nominee Mike Pence and more than 30 others overshot a LaGuardia Airport runway,” said the Port Authority of New York and New Jersey. The Port Authority had temporarily shut down the runway, but it has since been reopened.

Pence took to Twitter that night to announce that he will soon be back on the campaign trail.

The plane—which was carrying Pence, his security team and a press pool—had just landed at LaGuardia Airport, Politico reported. 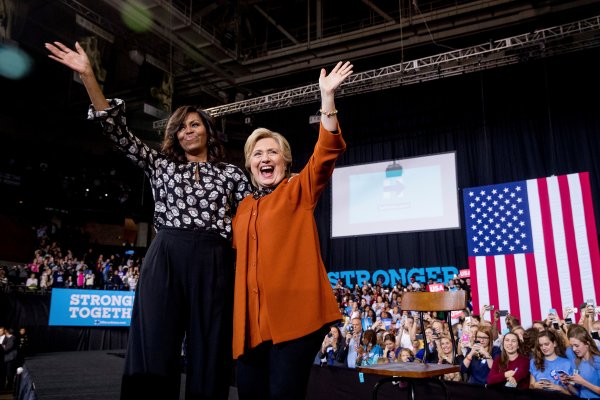 Michelle Obama Joins Hillary Clinton on the Trail
Next Up: Editor's Pick