How an Epidural May Lower Postpartum Depression Risk

Pain during childbirth can be excruciating for some women—and its harmful effects may reach beyond the delivery room. A small new study suggests that getting a pain-relieving epidural injection during labor may lower the risk of developing postpartum depression.

“Labor pain matters more than just for the birth experience,” said lead author Dr. Grace Lim, director of obstetric anesthesiology at Magee Women’s Hospital of the University of Pittsburgh Medical Center, in a press release. “It may be psychologically harmful for some women and play a significant role in the development of postpartum depression.”

Overall, 61% of U.S. women get an epidural while giving birth, and the injections can be controversial. This is in part due to an ongoing debate over whether they are linked to more Caesarean sections or have other negative effects for mom and baby; some women who plan an unmedicated birth feel guilty if they end up opting for this type of pain relief. The new research suggests that epidurals may have benefits beyond pain relief.

For the study, which was presented at the American Society for Anesthesiologists’ annual meeting, Dr. Lim and her colleagues reviewed the medical records of 201 women who received an epidural while in labor, and who rated their pain on a scale from 0 to 10 throughout the entire birth process. From these numbers, the researchers calculated the percent by which the women’s pain improved after the epidural.

Six weeks after their babies were born, the new moms also completed a questionnaire used to assess whether a woman may have, or may be at risk for, postpartum depression.

RELATED: 9 Things Every Woman Should Know About Mental Heath During Pregnancy

The researchers controlled for factors already known to increase the risk for postpartum depression (including pre-existing depression and anxiety, as well as post-delivery pain caused by tissue trauma). After accounting for these factors, the results showed that in some women, labor pain alone was a significant risk factor: The lower their pain-improvement scores (suggesting that the epidural had not provided substantial relief) the higher their depression-scale scores.

In other words, “we found that certain women who experience good pain relief from epidural analgesia are less likely to exhibit depressive symptoms in the postpartum period,” said Dr. Lim. The researchers conclude that alleviating labor pain might help reduce the risk for postpartum depression in some women. (The study still needs to be published in a peer-reviewed medical journal, which is key to confirming the results.)

However, the researchers acknowledge that a woman’s labor experience is just one of many factors that contributes to her how she feels after giving birth. “Postpartum depression can develop from a number of things including hormonal changes, psychological adjustment to motherhood, social support, and a history of psychiatric disorders,” said Dr. Lim.

Plus, she says, labor pain may be worse for some women than others. More research is needed to identify women who are likely to have extremely painful childbirths, and who would benefit the most from interventions to help reduce pain and its potential effects on postpartum recovery.

RELATED: 10 Signs You Should See a Doctor for Depression

Nurse midwife Lee Roosevelt, PhD, who is also a clinical professor of nursing at the University of Michigan-Ann Arbor, says these new findings are surprising because they contradict a larger study, published in 2015, that included more than 6,000 women and found that epidurals were linked to higher rates of postpartum depression.

Roosevelt, who was not involved in either study, points out that lack of social support (from family, doctors and nurses, or doulas or midwives) is a strong risk factor for postpartum depression—and that this may have played a role in the current findings.

“Social support is also predictive of whether women planning an unmedicated birth are able to move through the birth without getting an epidural,” she told Health. “I think when women are not prepared for the pain of childbirth, and don’t have people around them who are able and willing to help them through birth, they can feel traumatized.”

For a woman who has decided against medication, getting to the point where she needs an epidural could put her at risk for postpartum depression, she says. Likewise, a woman who was expecting adequate pain relief during labor but does not get it could also be at risk, she adds.

A painful labor doesn’t have to be traumatic or have lasting psychological effects, she says; but it certainly can if a woman feels unprepared or not in control, or doesn’t have enough support.

Another study presented at the conference looked at the trend of women requesting nitrous oxide, also known as laughing gas, during labor. This option has become more widely available in the U.S. in recent years; however, the study found that the gas only provides limited pain relief, and most women who use it still request an epidural as their pain progresses. 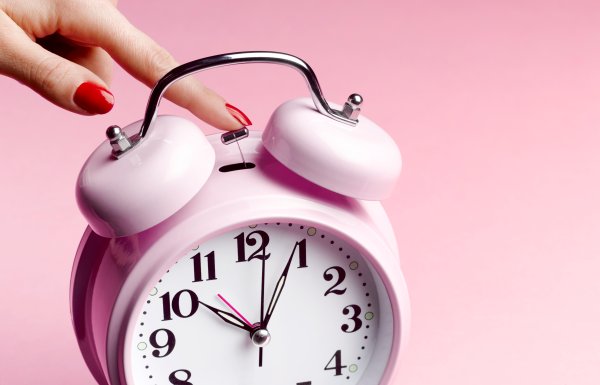 How This Broccoli Enzyme Can Slow Aging
Next Up: Editor's Pick