More than a decade ago, an amateur fossil collector found a brown, pebble-sized lump on a beach in Sussex, England. Now scientists have determined that lump is the first known fossilized brain tissue from a dinosaur.

The 133-million-year-old fossil is likely from a species similar to the Iguanodon, an herbivorous dinosaur that lived during the Early Cretaceous Period. Scientists announced the discovery on Thursday at the Society of Vertebrate Paleontology’s annual meeting in Utah, according to National Geographic, and they wrote about the find in a special publication from the Geological Society of London.

Finding fossilized tissue is very rare, but the researchers believe this brain tissue was so well-preserved because it was pickled in a body of water shortly after the creature’s death. “What we think happened is that this particular dinosaur died in or near a body of water, and its head ended up partially buried in the sediment at the bottom,” David Norman, who coordinated the research of the fossil, said in a statement.

The fossil also shows similarities to modern crocodiles and birds. Its discovery may shed light on how the brains of dinosaurs and other creatures evolved over time, an area where researchers have had comparatively little information before now. 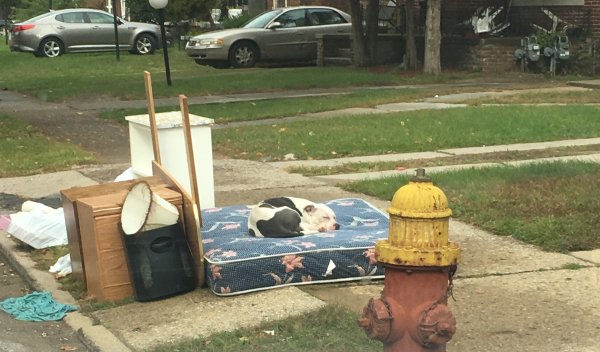 Dog Abandoned in Detroit, Rescued After Month of Waiting On Curb
Next Up: Editor's Pick