How Mosul's Liberation Could Send Shockwaves Across Europe

A detained man accused of being an ISIS fighter sits in front of newly displaced men near a checkpoint in Qayyarah, east of Mosul, Iraq, on Oct. 26, 2016.
Goran Tomasevic—Reuters
By Charlotte McDonald-Gibson / Brussels

Images of smoke plumes rising over the Iraqi desert as troops move to liberate Mosul from ISIS may seem very far removed from life in Europe. But the turmoil could spill into the continent as the offensive puts both refugees and foreign jihadists on the move, and strains delicate relations with Turkey.

The most urgent concern for Europe – voiced this week by French President François Hollande – is the presence of around 4,000 Europeans fighting with extremists in Iraq and Syria. If Mosul and ISIS’s Syrian stronghold of Raqqa fall, it could force legions of battle-hardened youths back to a continent already reeling from a wave of terror attacks.

“Foreigners will not find it easy to go into the underground insurgency that the Iraqi members of ISIS will join, and it is similar in Syria,” says Richard Barrett, a former British counter-terrorism official who is now an associate fellow at the Royal United Services Institute in London. “People may move on elsewhere, or they may go back home. But many of them will not be able to stay or want to stay in Syria or Iraq.”

Countries in Europe have insufficient policies for those that do come home, Barrett says. Simply jailing the most dangerous jihadists and returning the rest to the communities they came from will backfire, he warns, and could lead to further radicalization if the alienation and lack of connection which attracted the youngsters to extremist ideology in the first place is not addressed.

“In their home conditions [the returnees] now have some cache… they can exaggerate their story, possibly leading to more radicalization with younger ones who were not able to go,” Barrett tells TIME. “Maybe it will be difficult for them to get into Iraq and Syria anymore, but there are opportunities still for belonging to a radical violent extremist group, and even if it’s only a very small group of friends, it is still a risk.”

Read more: Iraq Takes on ISIS as the Battle for Mosul Begins

In Belgium, the European Union country with the highest per-capita number of fighters in Syria and Iraq, ISIS media is reported to be telling new recruits to stay at home and plan attacks there, rather than travel to Iraq and Syria where their territory is diminishing.

While E.U. nations are now sharing intelligence when it comes to stopping people joining ISIS in the first place, there is little agreement on best practice for reintegrating fighters who do return. Rik Coolsaet, an expert on radicalization from Ghent University, says the focus has largely been on the security aspects, rather than social reintegration.

“For those who come back, there is a structure in place to try to identify them, but I think it is now urgent… to develop tailor-made approaches to these individuals, because an overall one-size-fits-all does not work,” he says.

Another concern for the E.U. is an influx of refugees, an issue which caused chaos for the bloc last year when more than a million people arrived seeking sanctuary.

The ferocity of the battle for Mosul has already forced nearly 11,000 people from their homes, says Leo Dobbs, a spokesman for the United Nations refugee agency, UNHCR. The UN High Commissioner for Refugees, Filippo Grandi, has warned that up to a million people could flee the city. Right now, the displaced are staying close to home hoping to return when the fighting subsides, but Dobbs says refugee movement into Turkey and to Europe is “a possibility that we have to take into consideration”.

A key ally in managing any new refugee flows — and monitoring the borders for foreign fighters trying to sneak home — is Turkey, a NATO partner, member of the anti-ISIS coalition, and the country separating the E.U. from Iraq and Syria. But relations between Turkey and the E.U. are strained by Turkish President Recep Tayyip Erdogan’s wide crackdown on supposed dissidents following the failed coup in July, and disagreements over issues like visa-free travel for Turks in the E.U.

Turkey has also proved a difficult partner to the U.S.-led coalition. Ankara views the Syrian Kurdish forces as a hostile group allied to Kurdish separatists in Turkey. But the U.S. and E.U. consider the Syrian Kurds a key ally in the fight against ISIS. Iraq also takes a dim view of Turkish incursions on its soil, and Erdogan has already rankled Iraq’s leaders by implying they may take a more active role in the Mosul operation.

“With the Raqqa and Mosul offensives, Turkey for its own domestic reasons has played a rather aggressive game, and in both cases, it is not exactly what the E.U. and the US would want Turkey to do,” says Marc Pierini, a visiting scholar at the Carnegie Europe think tank.

While fear of foreign fighters or a repeat of last year’s migration crisis may be worrying Europe’s leaders now, managing the delicate geo-political balance in a region right on their doorstep may prove the more lasting challenge. 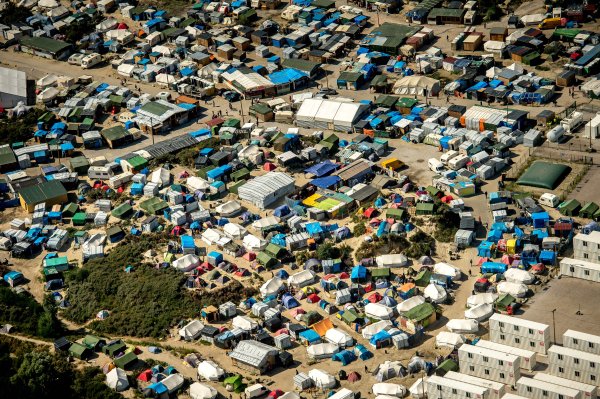 What to Know About the Controversy Over Child Refugees Arriving in the U.K.
Next Up: Editor's Pick