Last Wednesday, Gambia joined South Africa and Burundi in a growing exodus of African countries from the International Criminal Court.

The week before, Filipino leader Rodrigo Duterte agreed to drop his country’s hard-fought legal victory at The Hague’s Permanent Court of Arbitration, which found that Chinese naval encroachments in the South China Sea violated the Philippines’ rights under the U.N. law of the sea.

Even Europe, the birthplace of international law, has not been immune. Case Study A was the U.K.’s decision earlier this year to exit the E.U. (“Brexit”). More recently, Wallonia—a Belgian region of three million people—blocked a Canada-E.U. trade agreement. The deal took years to negotiate and promised to bring a population of 500 million on both sides of the Atlantic under a more unified market.

What is driving this retreat to national borders?

For one, rising inequality in many countries has led to a sense of anxiety and distrust of the wealthy. The polling firm Greenberg Quinlan Rosner has found that, while most voters tend to be pro-trade, they become much more skeptical when told that modern trade deals allow multinational companies (but not unions and environmental groups) to sue governments outside of national courts. Concern over this so-called investor-state dispute settlement was part of what riled the Walloons. Such one-sided rights confirm the widespread belief of many that our system of government is rigged in favor of the rich. While globalization is not “over,” as some news analyses have suggested, its legitimacy is certainly being called into question.

Governments are also rethinking whether they delegated too much power to international judges in the first place. The International Criminal Court was founded in 2002 at The Hague as part of a decades’ long push in the wake of World War II to hold leaders accountable for genocide and other crimes against humanity. It has proven exceptionally willing to second-guess member governments in Africa, which by some political science measures is an indication of a laudable judicial independence. But at the international level, there can be such a thing as too much independence. After all, if a global court rules against states too much, the latter can simply opt out of the system. Compare this to national courts, which are much harder to opt out of.

Finally, countries are realizing that, just because legal solutions to conflict exist, it doesn’t make politics any less important. Officials in the Philippines won the moral victory over China with their court case, but the Communist Party leadership immediately made it clear that they would not change their military’s behavior just because an international court told them to. In contrast to this paper ruling, Duterte was able to cut $24 billion in investment deals on his state visit last week—something easier to accomplish with face-to-face diplomacy than litigation.

Just because we live in uncertain times doesn’t mean that international cooperation is doomed to the ash heap of history. But national leaders need to better explain how their citizens—not just their companies—benefit from international rules.

We need leadership on several fronts. In some cases, this will involve re-writing them to make them more balanced. The 12-nation Trans-Pacific Partnership presents such an opportunity, as both Hillary Clinton and Donald Trump have campaigned against it and called for a new type of trade deal that provides greater balance between special interests and the public interest.

In other cases, it will require more restraint on the part of the international judges and prosecutors themselves. They can draw lessons from our national judges. Who would have thought that conservative Supreme Court justices would have backed liberal causes like gay rights or the Affordable Care Act? Reading the political tea leaves is an often overlooked part of judges’ job description.

Finally, our leaders need to reclaim the word “politics.” An earlier generation of American leaders, from Woodrow Wilson to Franklin Delano Roosevelt, understood that international entanglements are more sustainable when they have the public’s support. But that goes against another more legalistic strain of thought in American life that thinks—to paraphrase Alexis De Tocqueville’s famous observation in 1835—that any political question can become a judicial one. Our litigiousness is apparently exportable. Early Thursday morning, Wallonia agreed to remove their opposition to the Canadian trade deal, in exchange for an opinion from European courts about the legality of the deal.

Judges can’t solve globalization’s public relations problem. That’s politicians’ job, and the sooner they accept it, the more secure our economies will be. 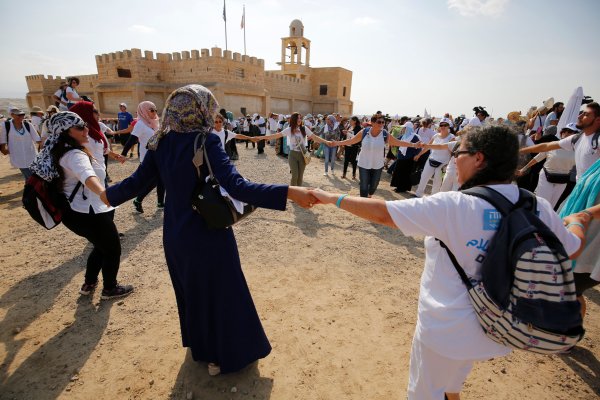 Abstention on UNESCO Vote Is Not Good Enough
Next Up: Editor's Pick