John Oliver speaks onstage at The Center for Reproductive Rights 2016 Gala at the Jazz at Lincoln Center on October 25, 2016 in New York City.
Michael Loccisano—Getty Images
By Raisa Bruner

Last Week Tonight host John Oliver pulled no punches at a Center for Reproductive Rights gala this week, opening by welcoming the “nasty women—nasty, nasty, nasty… Some of the nastiest among us, I imagine,” referring to Donald Trump’s memorable attack on Hillary Clinton during the third debate.

As Saturday Night Live did before him, Oliver then launched into a takedown of Trump’s graphic description of a late-term abortion: (“In the ninth month, you can take the baby and rip the baby out of the womb of the mother just prior to the birth of the baby,” Trump said at the debate.)

“His discussion of late-term abortions showed no real understanding of how abortions work, no clear understanding of the basic biology of women’s bodies, and a very poor sense of grammar as well,” Oliver said scathingly of that description, as EW reports. “So I guess we got, in a sense, what we were asking for.”

“If you ask Donald Trump to draw a fallopian tube, I cannot imagine what you would get back other than a child’s drawing of a cobra.”

Oliver was in attendance at the gala to honor filmmaker Dawn Porter, whose documentary Trapped follows a group of reproductive rights workers fighting anti-abortion laws. Author Isabel Allende was also an honoree at the event. 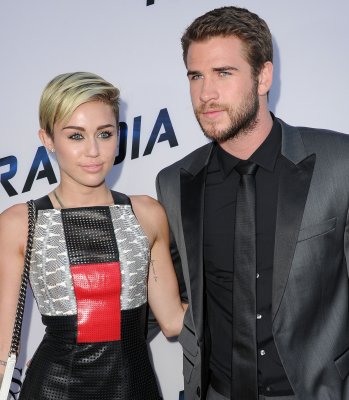 Miley Cyrus Has Some Problems Wearing Her Engagement Ring
Next Up: Editor's Pick