Why Real Peace in Colombia Matters to the U.S.—and the Rest of the Americas

Santos with his wife and children after voting to end hostilities with FARC on Oct. 2
Mario Tama—Getty Images
Ideas
By James Stavridis
Admiral Stavridis (Ret.), a TIME Contributing Editor, was the 16th Supreme Allied Commander at NATO and is an Operating Executive at The Carlyle Group. His new book is 2034: A Novel of the Next World War. His previous nonfiction book was Sailing True North: Ten Admirals and the Voyage of Character

In Gabriel Garcia Marquez’s novel The General in His Labyrinth, the Columbian Nobel Prize laureate imagines General Simon Bolivar musing as he tries to liberate South America in the 19th century: “I go to seek a great perhaps.” This moody sentiment has distinct echoes in Colombia today.

Colombian President Juan Manuel Santos recently had one of the most dramatic versions of “good news, bad news” anyone could imagine in the world of international politics. On Oct. 7 he won the Nobel Peace Prize for negotiating a historic peace agreement ending a 52-year virulent insurgency in his nation. But he won the Nobel just days after he saw that agreement narrowly defeated in a national referendum that he had called. According to polls, the peace accord had appeared to be cruising to a victory. This kind of turn of events is sadly typical of Colombia, a nation important to U.S. policy in South America.

When I served as Commander of U.S. Southern Command, which is responsible for U.S. military activities in Central and South America, a key part of my job was to support our military, intelligence and diplomatic partners in Colombia as they fought the Revolutionary Armed Forces of Colombia (FARC). At one time, FARC boasted nearly 20,000 armed combatants, held sway over large tracts of the country and ran a multi-billion dollar cocaine business. But its fortunes have been falling for years, as the Colombian people turned against it, and the Colombian military—aided by the U.S. as part of the Plan Colombia —gradually eroded its combat capability.

Negotiations in Havana led to the creation of the peace agreement, which would minimize incarceration for FARC members, provide them with guaranteed seats in the parliament, and establish reconciliation and demobilization mechanisms. Now that voters have rejected the agreement, the tentative ceasefire has been extended, and all parties are scrambling for next steps. There are five reasons the U.S. should do all it can to see this accord come to fruition.

First, Colombia has a potentially powerful economy that could be an engine of growth in the slumping South American economic sphere. The U.S. and Colombia have a free-trade agreement, and improving the Colombian economy could create a stronger trading partner for the U.S.

Second, a peaceful Colombia would have a far better chance of reducing cocaine traffic from the Andean Ridge to the U.S. The agreement would allow the U.S. to continue to enlist Colombia as a partner in interdiction operations.

Third, the agreement could help reduce violence both in Colombia and north into Central America, where many refugees are fleeing instability.

Fourth, from a geopolitical and security perspective, a stable Colombia—which has the best military in the region—could provide an anchor for humanitarian, disaster relief and counter-narcotics operations. Colombia would be able to work even better with other close U.S. partners in the region, including Mexico, Chile, Peru and Brazil.

Fifth, there is a fundamental political value at stake: democracy. Colombia has been an independent democratic nation for nearly as long as the U.S.. We should be cheering as it overcomes a half-century of struggle with a Marxist-based insurgency that has used the most brutal tools of terror, kidnap, torture and murder to try to overthrow the government.

The U.S. must assist the people of Colombia with political, economic and military support as they complete the endgame of defeating the FARC. That means keeping Colombia high on the next U.S. President’s agenda, ensuring that military-to-military contracts remain strong, sharing intelligence and information, providing foreign aid, encouraging the support of the international community (especially the E.U.), and sending our top diplomats to Bogotá. Helping our Colombian friends beyond the metaphoric “great perhaps” of Marquez’s powerful and tragic novel is the right strategic move for the U.S., as well as sound moral judgment that will benefit the entire hemisphere. 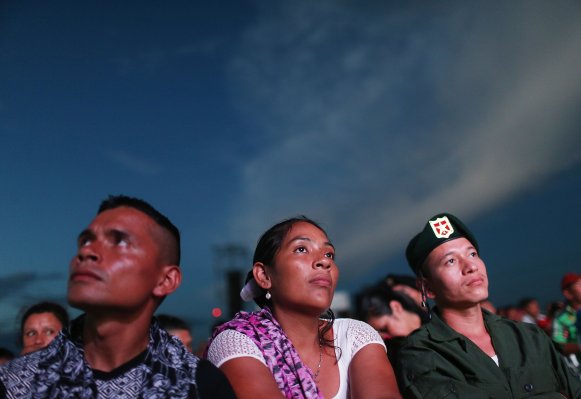 Neither at War Nor at Peace, Colombia's FARC Rebels Watch and Wait
Next Up: Editor's Pick