There haven’t been many exhilarating moments in Hillary Clinton’s long slog to the presidency, but this may have been one of them: a gorgeous late-October afternoon in New Hampshire, an outdoor rally amid the falling leaves, a stage full of female candidates–two for Congress, one for the Senate, one for President plus Massachusetts Senator Elizabeth Warren, leaving only one lonely guy (the candidate for governor). The women wore interesting colors–a perfect firehouse red for Warren; a lush violet for New Hampshire Governor Maggie Hassan; a cool, crisp sky blue for Clinton.

This was a perfect reversal of fortune from the days when five of the six speakers would be men in blue suits with red ties, joined by a lone woman–a candidate for state treasurer, perhaps–also dressed in a navy blue suit. The tone was set by the incendiary Warren, who responded to Donald Trump’s calling Clinton a “nasty woman” in the third debate: “Get this, Donald–nasty women are tough. Nasty women are smart. And nasty women vote. And on Nov. 8, we nasty women are going to march our nasty feet to cast our nasty votes to get you out of our lives forever.”

This is a matter of some significance. We are about to experience a radical change in American politics: a woman may well be our next President. It’s a transformation that’s been lost in the roil of the campaign. Clinton is so familiar a character that she has been disaggregated from her gender. She is the experienced candidate, the status quo candidate, the Establishment candidate; she is the awkward, slippery, morally challenged candidate. All true, but she is also a woman–and women are different from men. “I do have a lot of plans, I do. And I get criticized for having so many plans,” Clinton said, following Warren in New Hampshire. “Maybe it’s a bit of a women’s thing because we make lists. We do, we make lists, and we try to write down what we’re supposed to do and then cross them off as we go through the day.”

It is difficult to imagine Donald Trump making a list–or doing many of the things Clinton would if she becomes President: listening to a complicated argument without interrupting, negotiating patiently with her opponents, looking before she leaps. These are not qualities exclusive to women, but they are more common to humans who do not suffer from testosterone poisoning. And given the profusion of masculine bluster in our politics, the unseemly leap into silly wars and overambitious programs, these are qualities that may nudge us toward a less hypercaffeinated politics.

But wait a minute, you say: Didn’t Hillary Clinton leap into silly wars in Iraq and Libya; didn’t she try to push an ill-conceived, unnegotiated health care plan through an unwilling Congress in 1994? Doesn’t she say blustery things like “basket of deplorables” and “vast right-wing conspiracy”? Yes, and she’s gotten her head handed to her every time, which is where her other significant quality as a candidate comes in: experience. The fact that she’s been around for 30 years is derided as “more of the same,” but it isn’t–in fact, it’s a radical departure from the past three Presidents. Bill Clinton, George W. Bush and Barack Obama came to Washington as newbies, and suffered as a result. Hillary Clinton had a ringside seat as her husband struggled to pass a budget plan with exclusively Democratic votes in 1993, and she saw what happened when she tried to pass a health plan without negotiating with her opponents. She has grown more seasoned, more willing to compromise, over time, as a Senator and Secretary of State.

This has been a presidential election about deficiencies rather than strengths. Trump’s deficiencies are overwhelming; Clinton’s are not inconsiderable. We’ve learned more about her awkward secrecy than about her lists of proposals. Some of those proposals are Democratic boilerplate; many of them depend on a faith in government that most Americans no longer share. It remains an open question how much of her imprudent overseas activism remains.

This is also said to be an election about “change,” with Trump the superficial agent of disruption. People are said to be sick of politics as usual. But when you think about it, having an intellectually mature and experienced President would be a seismic shift away from the long run of “outsiders” in the Oval Office.

And guys, if you don’t believe that having a female President would be a dramatic rupture from male governance, well, your wives probably have a list of reasons why it would. 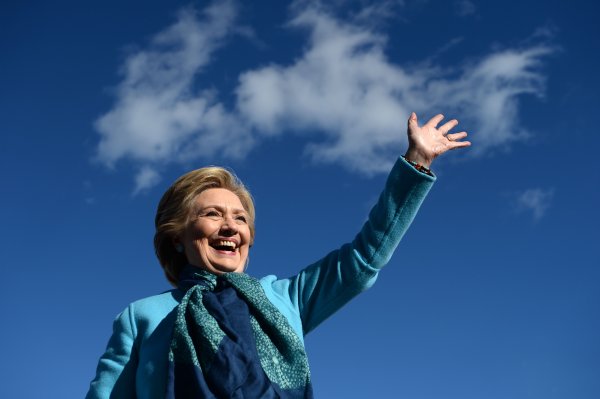